Next up on the Tattooed Poets Project is Rob Ganson, who informs us "I am tattooed over 75% of my body with award winning ink by my friend Ron Stephens of Tattoo Alley in Ashland, Wisconsin."

Rob has sent us a plethora of tattoos, a sample of which follows: 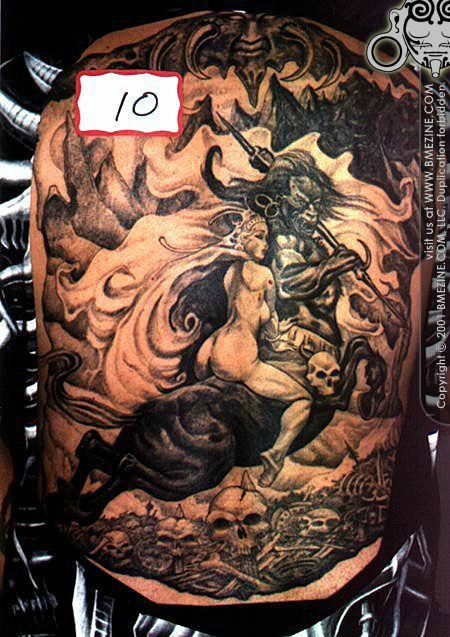 "The back piece was Ron's interpretation on a  [Frank] Frazetta painting called 'The Moonmaid.' "

Next up is this portrait of Jim Morrison: 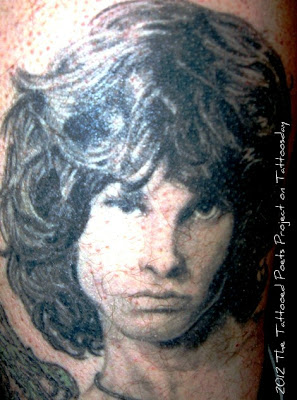 Rob says this tattoo of the self-proclaimed "Lizard King" was inspired by Morrison's introduction of poetry to the masses of the rock audience.

this homage to "Frank Zappa ... happened because, well, Zappa RULED!"

And just so we can pay tribute to other great figures in music, Rob also shared this portrait of the Rolling Stones' guitarist Keith Richards 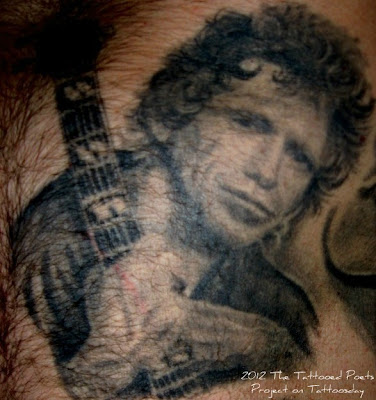 and the legendary bluesman Robert Johnson: 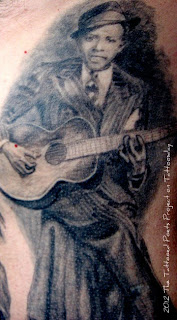 All in all, quite a collection of music legends on Mr. Ganson's body!

As for a poem, Rob sent me several poems for submission and I chose this one:

“I turned silences and nights into words. What was unutterable, I wrote down. I made the whirling world stand still.” ― Arthur Rimbaud

What use a poet
but to hurl language
like a spear, to
sear the eye
of the
reader?

And you, dear reader -
plagued by open eyes -
must bear the brunt
of moments -
blunt trauma -
served like
songs.

and as the world churns
absent these nightmares
the echoes fall -
moments caught
in poet's leaves
freeze like
Coleridge's
window.


~~~
Rob Ganson is a poet from the shore of Lake Superior. He has been published in three volumes of poetry, Float like a Butterfly, Sing like a Tree, Follow the Clear River Down, and A Storm of Horses, as well as in numerous anthologies and journals. He tends to write on themes of nature and the human condition. 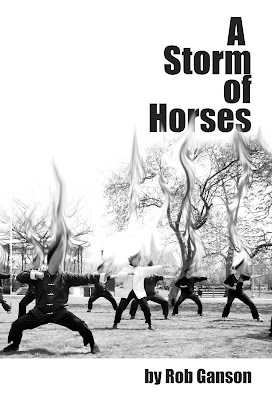 Thanks to Rob for sharing his cool tattoos and poetry with us here on Tattoosday!

If you are reading this on another web site other than Tattoosday, without attribution, please note that it has been copied without the author's permission and is in violation of copyright laws. Please feel free to visit http://tattoosday.blogspot.com and read our original content. Please let me know if you saw this elsewhere so I contact the webmaster of the offending site and advise them of this violation in their Terms of Use Agreement.
Posted by Tattoosday at 2:50 AM

Rob is awesomely talented and then some. We've been great friends since early 2005. His three books of poetry sit proudly upon my shelf. And yeahhh, his tattoos are pretty cool, too. I've only ever seen pictures of them and hadn't seen the ones of Robert Johnson or Keith Richards before, so this is a rare treat. Thank you for featuring such a stellar human on your site.