Say what you will about the Tattooed Poets Project, but it has been dominated by Americans these past four years. Unless I'm forgetting someone, we've only had one poet featured from outside the U.S., and that was Claire Askew, whose ink appeared back in 2009 here.

Well, this year we are expanding a bit more, including a few more poets that reside outside of the States, and our first such shining example is Jo Langton.

Jo is sharing two tattoos, both of which were done by artists at Affleck’s Palace, in Manchester UK. She doesn't remember the artists' names and explains,


"I got both of these tattoos in a bit of a grief stricken haze. I did not form a relationship with the artists in question, I turned up on the day and they slotted me in there and then. I didn’t want the artist or the tattooing experience to overshadow the meaning."

This first tattoo was done in the spring of 2008: 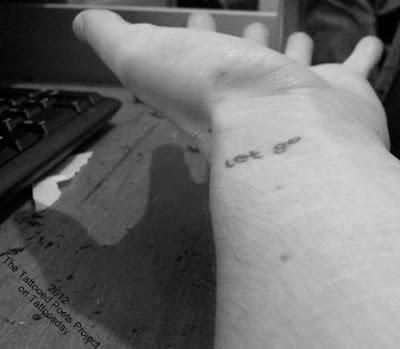 
"The inspiration for this tattoo came, in part, from my over-indulgence in the song 'Let Go' by Frou Frou (featured on the Garden State soundtrack) and equally from the death of my Grandad. I wanted something visual to remind me to let go of my past misdemeanours and lack of motivation, and to signify a push forward in my life that sprung from my Granddad’s last words to me 'keep on keeping it up' in relation to the study of my degree."

She also shared this tattoo that was inked last summer, in 2011: 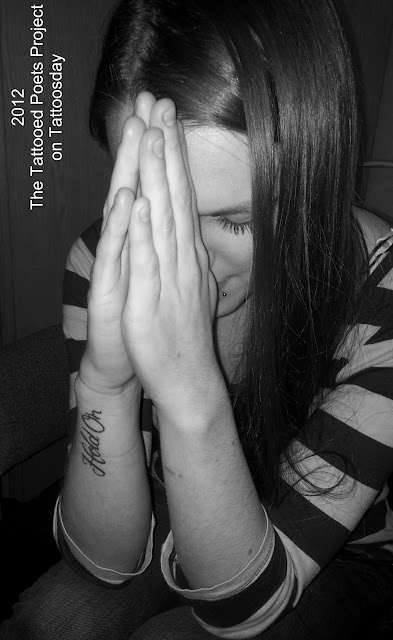 
"When my Grandpa died a couple of years later, it felt only natural for me to once again, signify this time in my life. I had completed my degree and achieved a First Class Honours. Neither of my grandfathers were around to see this, but I know they both would have been proud to know I had made it. I was proud of myself, and proved that holding on to what I wanted from life would have fruitful effects, just as my Grandad had said three years earlier."

Here's a poem from Jo:

she tried
silent
He pursed

found another, eh ? you say, we go inside.

surprised, you know
know anything about these horrible things
[I haven’t told her / if that’s what you mean]
admitting ?

the human shape of the thing made it particularly sinister.


~ ~ ~
Jo Langton is a poet from Manchester, UK, currently studying her MA in Creative Writing at the University of Salford. She had her first chapbook published with Liverpool-based small press Erbacce and it can be found here. She has since gone on to be published online in Bare Hands, The Railroad Poetry Project, Streetcake and 3AM Magazine. She has a set of hand sew tea bags with word-leaves forthcoming from Zimzalla.
Thanks to Jo for sharing her poem and tattoos with us here on the Tattooed Poets Project!
This entry is ©2012 Tattoosday. The poem and tattoo are reprinted with the poet's permission.
If you are reading this on another web site other than Tattoosday, without attribution, please note that it has been copied without the author's permission and is in violation of copyright laws. Please feel free to visit http://tattoosday.blogspot.com and read our original content. Please let me know if you saw this elsewhere so I contact the webmaster of the offending site and advise them of this violation in their Terms of Use Agreement.
Posted by Tattoosday at 3:20 AM