Among this year's Tattooed Poets' submissions, this is one of my favorite photos:

This was submitted by the poet Erica Mena, whose tattoo was inspired by the great Pablo Neruda.

Erica gives us the detail behind these wonderful tattoos:


"This is my most intimate tattoo, my Neruda tattoo: 'Love is so short, forgetting is so long.' It's a full line (punctuation included) from Poem XX of Neruda's Twenty Love Poems and a Song of Despair in translation by W.S. Merwin. The fish in concentric circles is the symbol printed on all of Neruda's books from mid-way through his career, and was drawn from the bronze statue at his most famous house in Isla Negra. The other two images were drawn by the tattoo artist, in response to two other lines from the same poem: 'The same night whitening the same trees. / We of that time are no longer the same.' and 'Write, for example: the night is shattered / and stars shiver blue in the distance.' The design and work were done by Ram at Fat Ram's Pumpkin Tattoo in Jamaica Plain, Massachusetts. 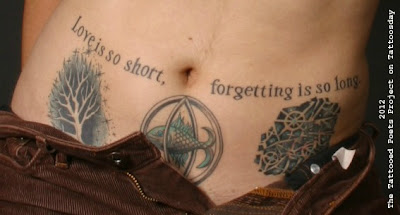 I read Merwin's translation of Neruda's Twenty Love Poems when I was fifteen, and had that conversion experience, the moment when you realize this is what you want your life to be about. Not the sentiment, but the poetry. These poems, and this line in particular, convinced me that poetry can move between languages, times and places, freely and with no loss, when put into the right hands. When getting the tattoo, I considered getting the Spanish line: 'El amor es tan corto, el olvido es tan largo,' but chose the English because that was how I first encountered it. Out of all my tattoos it also hurt the most to get, fittingly I suppose--there was a moment where Ram was outlining the circles where it felt like my entire leg was on fire. Totally worth it."

I would add that I concur with Erica completely and offer up, as proof, my post over on BillyBlog in April 2008 here. I was running down my favorite poems for National Poetry Month and #28 was any of the poems in the book, and it just so happens I pointed to Poem XX as one shining example. The original edition translated by Merwin and illustrated by Jan Thompson is a must-have in anyone's library. But, I digress.

Erica offered us two poems, one of her own and one she translated. We'll share both:

hoping you will understand my point
this is not a myth

Every person dreams about meeting someone

Throw the dice, Lord, your turn has come and it is winter. The trident is cornered, the mountains covered with a skin of ash. Lord, behold light’s song here, your due, in the stillness of the sea and the pure discretion of the endless night. Behold your son, Fire, burning the whole surface with his touch and seducing the water with his gilded tongue. Look here, Lord, his stepsister Dawn, liquid hierophant, maker of shape. In their terrible language they tell of celebrations, obedience, sin. This time, Lord, throw to us the seed and the male of the healthier species. Don’t announce him by chance, because he will become a cry and rise up with the warm murmur of pavement, and once again be lost to us, punished, denied. Let none but you, oh Lord, wield the butcher’s knife this time; mature a chord when life ceases and rain unexpectedly cleanses the lovers’ yoked hips. Throw the dice, Lord, your turn has inevitably come. Cast them without fear from your wide hand, because luck’s twelve sides won’t wait, and the sky points towards multitudes and disaster. Throw them, Lord, your turn has come and it is burning summer.

Translation of “Deus ex machina.” From La invención del día [The Invention of the Day]. © José Mármol. By arrangement with the author. Translation © 2011 by Erica Mena. All rights reserved.
Published in Words Without Borders, November, 2011


Erica Mena is a poet, translator and print designer, not necessarily in that order. Her poetry and translations have appeared or are forthcoming in Vanitas, The Dos Passos Review, Pressed Wafer, Arrowsmith Press, Words Without Borders, The Iowa Review, The Kenyon Review, PEN America, Asymptote, Two Lines and others. She is the coordinator and co-host of Reading the World Podcast, a monthly conversation about literary translation. She is the founding editor of Anomalous Press.

Thanks to Erica for contributing this wonderful entry of the tattooed Poets project on Tattoosday!


If you are reading this on another web site other than Tattoosday, without attribution, please note that it has been copied without the author's permission and is in violation of copyright laws. Please feel free to visit http://tattoosday.blogspot.com and read our original content. Please let me know if you saw this elsewhere so I contact the webmaster of the offending site and advise them of this violation in their Terms of Use Agreement.
Posted by Tattoosday at 2:31 AM