Amy narrates her history of getting tattooed:


"I've never been that sure why I got my tattoos and to be honest I'd probably put it down to poor impulse control.

I got my first when I was seventeen. Me and my friend Suzy were wondering around bored one day and we found ourselves looking in the window at Terry's Tattoo Studio. We could see all the big, hard men in there, grimacing and posing, with their arms covered in thistles and doves and black panthers.

To us it looked dead exciting and grown up and 'cool' and so we snuck in for a closer look.
An hour later we came out, all red-faced and tearfuI, me with a butterfly on my stomach and Suzy with a flaming heart on her shoulder. 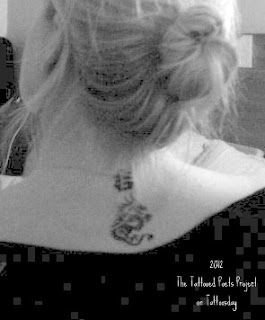 We thought we were pure rock 'n' roll but we were too scared to tell our parents what we'd done. We both left it at that but then, ten years later, I got a Chinese good luck symbol on my back, ostensibly to bring me good luck but mostly it was to impress a sailor I was keen on.

My dragon was next and that was to show I was brave (or getting braver) and the flowers on my leg started off as a single bud from when my friend Polly and I went to get tattoos together and over the years the bud has grown. I think there's some meaning in that. 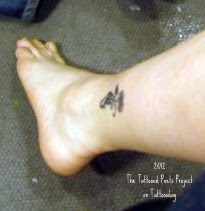 In 2007 my Dad died suddenly and I had this strange instinct to let him know that I was okay, that I was coping, and so I think that's why my flower grew as it did. 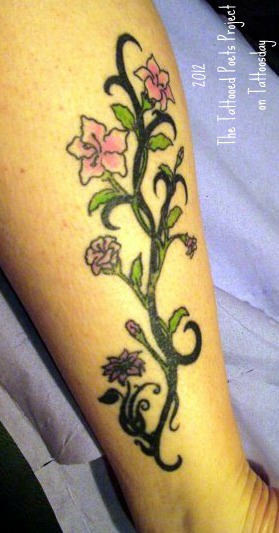 And if somehow my Dad was aware of all this? Well he'd probably be shaking his head and saying ruefully "daft lassie, what are ye up to now?"

I love the idea of that. He thought when it came to making big, life-changing decisions that I was an idiot and yes, he was probably right but he also showed a grudging and loving admiration for my impulsive side. 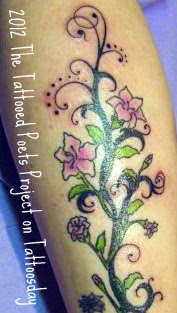 For now, I think I'm done with tattoos, but you never can tell when I'll take a wee notion for another."

It's cool seeing the evolution of this, Amy's floral tattoo, that has grown along with her.

She sent us this lovely poem:

What you remember of them most is

that they could not stop talking,
and that the road from Inverardran veered left,
and took you from the kirk by the Toll
of Atholl to the Shoulder’s Choke
where you heard them both,
heralding their own as the worst.

Then by Stob Binnien,
shrouded in cloud and the eldest,
who sucked black mints,
black-tongued, bright-eyed and spry.
She picked at stitches and thought aloud
if it had been made in ‘Ehberdeen’
then it would have been made fitter
for its own purposes.

And the younger, the witcher,
the one you loved,
all hook-eyed and pleasure driven,
passing the pretty lace between them.
She pulled it through but worse
this time, tighter, the threads biting.
She winked at you, slowly, dropping a lid
and said “it just depends who you know”

And then Ben More and the great pools,
the flooded lights of Saint Fillan,
patron saint of the mad and the over-bound

and between them, a circle of pretty white lace,
holding them both together.

Amy Rafferty is a Glaswegian living in the West Midlands. Her poetry and prose can be found in several anthologies and publications, both on-line and off.

In 2009 she received a highly-commended mention for her poetry collection, Pétursdóttir and the Land of Tiny Voices and in 2010, two of her poems were short listed for the international Fish poetry prize. Amy is a postgraduate student of Creative Writing at Glasgow University and sings with the cult, Glasgow band, The Recovery Club. She is also the baby in the graveyard scene of the original Wicker Man movie but she doesn't like to talk about it.

If you should wish, you can hear Amy singing here.

Thanks to Amy for sharing her words and ink with us here on Tattoosday!


If you are reading this on another web site other than Tattoosday, without attribution, please note that it has been copied without the author's permission and is in violation of copyright laws. Please feel free to visit http://tattoosday.blogspot.com and read our original content. Please let me know if you saw this elsewhere so I contact the webmaster of the offending site and advise them of this violation in their Terms of Use Agreement.
Posted by Tattoosday at 5:51 AM