On Saturday, I was at the park, playing ball with my daughter, and I noticed a guy off in the distance with some dark ink on his upper arm. When we were ready to leave, I ambled on over to him.

What I initially spotted was just the tip of the iceberg, so to speak. Brian was more than generous in rolling up his sleeves and sharing his astonishing work. He showed me both biceps and his back piece which, combined, he estimates represent nearly 150 hours of work.

First, the one arm:

Both pieces, what he calls Bad Angel and Good Angel, were cover-ups.

And then, the feather in his cap, so to speak, his back piece: 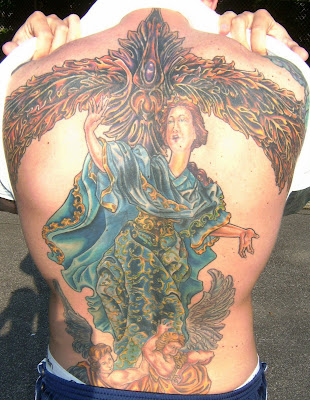 One of Denise's tattoos, albeit a much smaller one, appeared previously on Tattoosday here.

Thanks to Brian for sharing these awesome tattoos with us here on Tattoosday!
Posted by Tattoosday at 5:38 AM