It was Rush Hour in Penn Station when I spotted a fairly large tattoo on the right ankle of a woman walking, as it turned out, to the same train platform as me.

I was able to grab a few words and a photo from Pepper as we waited for the downtown train: 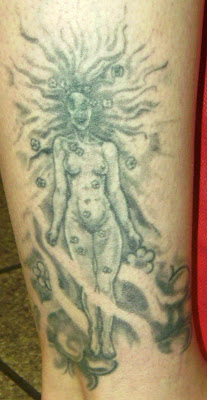 This one-color tattoo, one would imagine, for its size, should have significant meaning (or so I thought), but that is far from the truth.

Often, Pepper said, she doesn't "even remember that it's there".

An apprentice named Shawn inked this on her as part of his ongoing learning process. Pepper believes that it is based on the artwork from a comic book called "Sláine". She worked at the shop for only a year, and has no idea what became of the artist.

It never ceases to amaze me the variety of back stories behind tattoos. We are so accustomed to the deep meanings, the personal ordeals, the appreciation of art for art's sake. But more often than one might imagine, a tattoo is a signpost marking a moment in time, and nothing more.

I thank Pepper for sharing this tattoo with us here on Tattoosday!
Posted by Tattoosday at 9:22 AM