A Dozen (or So) of Ed's Sixty-Eight (Approximately) Tattoos

Every neighborhood has at least one or two of them: old-timers who have retired from the workforce and can now shed their suits and proudly display what they have accumulated over a lifetime: their vast tapestry of ink.

Ed lives in Bay Ridge, Brooklyn (my neighborhood) and worked for a bank for forty years. Even today, when the stigma of tattoos is dissipating with the changing times, Corporate America still has employee handbooks which prohibit visible body art.

Ed started getting inked, like many men of his generation, when he was 18 and entered the Service. And, over the years, he collected tattoos. And he's not done, although the real estate is shrinking in quantity.

By his best estimate, Ed gave me a number of sixty-eight (68!). While chatting with outside of the laundromat a couple of weekends back, he let me take a snapshot of his right arm. In this photo, alone, I count at least twelve individual pieces: 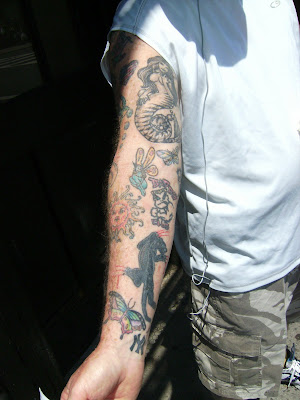 Although the focus of the shot is the mermaid on the bicep, one is still drawn to the butterflies, the traditional panther, the New York Yankees logo, the fairy, and the sun. 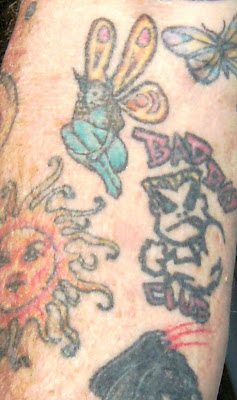 Old school tattoos have a tendency to be less customized and more based on existing flash art. The result may be an affinity for the pieces, but a lack of great "back story" for many (but not all) tattoos on the older generation of inked Americans.

With so much ink, it is often hard to remember where everything was tattooed, although Ed credits a lot of the work to Brooklyn mainstays like Michael Angelo and artists affiliated with the great Huggy-Bear Ferris.

Thanks to Ed for sharing his arm with us here on Tattoosday!

Of course, we hope to feature more of Ed's work here in the future....
Posted by Tattoosday at 7:34 AM