Two for Tattoosday: Some Traditional Work Imported from California

Last week I spotted a young tattooed woman chatting with a friend outside of the Chelsea Whole Foods store. I hesitated because I was running late, but doubled back across the street and introduced myself. As it turned out, Krista and her two friends, Ryan and Jake, had recently moved from San Francisco to New York. All of them had tattoos.

Her friend Jake shared his first, but I am deferring that one to a later, more appropriate date (hint: check back on Father's Day).

After seeing Jake's tattoo, I turned to Krista and Ryan. "Who's next?" I asked hopefully.
Fortunately, I didn't get the "Wasn't the one tattoo enough?" attitude.

Krista deferred to Ryan and he offered, with his friend's assistance, this amazing piece: 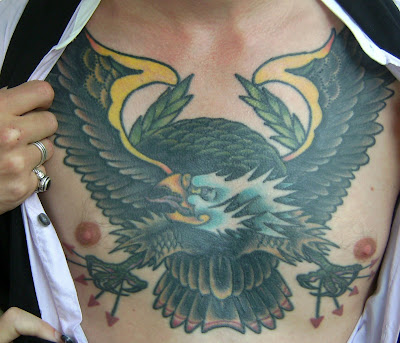 I was surprised, to be honest, to see such a huge, traditional sailor tattoo on a tall young man with a finely-waxed handlebar mustache, so I had to ask what was behind this amazing piece.

He had a simple answer, "I'm American." And the logic computes on different levels. The eagle is our national bird, and the art of tattoo, which was discovered by British sailors on the indigenous populations of the South Pacific, didn't really explode in popularity until American servicemen started bringing their body art home from overseas.

There is something purely American in the naval tattoos that have embedded themselves in our cultural psyches and, although other cultures may argue the uniqueness of such art to U.S. citizens, that is the perception that has been re-enforced by our society.

This amazing tattoo was completed in four four-hour sessions by Zach Johnson at Idle Hands Tattoo Studio in San Francisco. Mr. Johnson is no longer listed on staff there but, according to his MySpace page, he occasionally pops back in from time to time.

Chest tattoos are notoriously painful and Ryan concurred: the pain, he said, especially over the diaphragm, was the worst he's ever felt ("worse than that from accidents" he has been in, he insisted). And he has seven tattoos, to boot, so he is no novice.

I turned to Krista, inquiring, and smiled when it was clear she was contributing as well. I believe it was the first time I got three people together to participate, with three very different tattoos.

She offered up this unique tattoo, also by Zack Johnson:

Krista explained that Zack had drawn up a whole series of flapper-esque, gypsy-style profiles, putting his personal spin on each one. This one has a feline appearance and, as a lover of cats, she took a shine to the design. The tattoo, as a result, has a traditional feel, but with a modified spin that makes it more unique. I particularly like the collar with the bell attached to it: 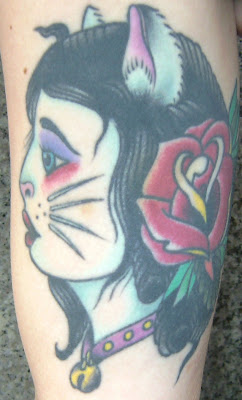 Thanks to Krista and Ryan for sharing their tattoos with us here on Tattoosday!
Posted by Tattoosday at 6:05 AM