I spotted Jason walking among the crowds during the annual Bay Ridge Fifth Avenue Festival.

He had sweet tattoos on his forearms but he chose to share one, near and dear to his heart. His wife chimed in that it was her favorite as well.

Where once there was a "bad tribal/skeletal dragon," there is now this phenomenal new tattoo on his left bicep: 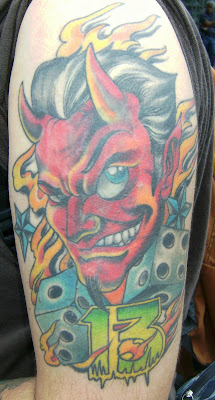 This was, he told me, his groom's gift, a tattoo commemorating his marriage, and the fact that he is a "lucky devil".

The piece was inspired, in part, by the artistic style of Coop, and includes a lucky seven (rolled on the dice) juxtaposed by the lucky number 13.

This cool tattoo was inked by Johan Florendo at Mean Street Tattoo Studio in the College Point section of Queens, New York.

Thanks to Jason for sharing his awesome lucky tattoo with us here on Tattoosday!
Posted by Tattoosday at 5:39 AM