I met Jeff and Jeanie in Penn Station as they were about to board an Amtrak train out of the city.

I've been trying to come up with clever terms for different inkspotting phenomenon, basically creating my own lexicon.

I'll call Jeff and Jeanie "boxcars". Meaning, I approached the two of them and gambled, asking them both to participate, and they came through. Like rolling two sixes on the dice (also known as boxcars). I would even venture to call them "blind boxcars", because I could only make out fragments of their ink, but they still shared. 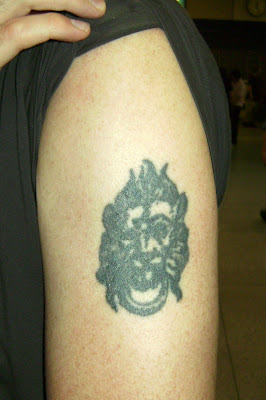 It's a nod to his astrological sign, Leo, and was also selected for its nod to Jean Cocteau's La Belle et la Bête (Beauty and the Beast).

Jeanie shared her tattoo below: 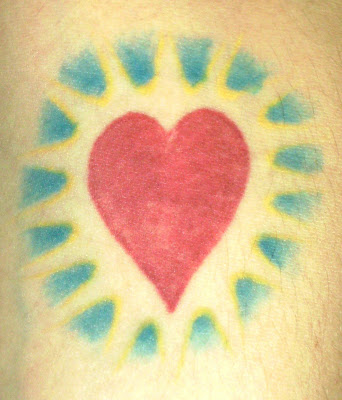 This piece literally has her wearing her heart on her sleeve and is inspired by Mexican art. The tattoo was completed by a friend of Jeanine's named John Flack.

I would have obtained more detail, but the couple had to board their train.

Thank you to Jeanine and Jeff for sharing their tattoos with us here on Tattoosday!
Posted by Tattoosday at 12:30 AM