I met Jubail on the corner of 34th and 6th Avenue, and he shared this awesome tattoo:

"Midnight Mile" is a song by Bouncing Souls, and it reminds him of coming home to New York City.

Jubail, who has "nine or ten" tattoos, was a student at Marshall University in Huntington, West Virginia.

He was about to earn his commission as a lieutenant in the U.S. Army when I spoke with him, and he knows he can rely on his tattoo to help him remind him of home here in New York.

He also has the Bouncing Souls logo on the inner part of the elbow, also known as the "ditch," which is one of the most painful places to get tattooed. 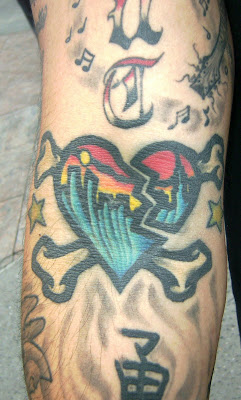 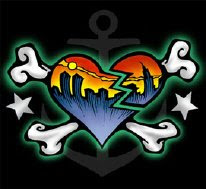 Jubail credits his ink to Saka at Tat-Nice Tattoos in Huntington, WV.

Thanks to Jubail for sharing his Bouncing Souls tattoos with us here on Tattoosday!

Posted by Tattoosday at 7:43 AM