My Third Tattoo: A Hand Steeped in Faith

Last June, I wandered into a 711 and met a tattoo artist named Pete, who works under the moniker Sweetpea. Like most artists, he himself has amazing work. However, I was camera-less that day, so I gave him a flier and we went our separate ways.

Later that week he e-mailed me and we scheduled to meet and talk about tattoos. We hit it off nicely and, in one of the perks of writing Tattoosday, I gained a new friend. Of the hundreds of people I have photographed for this blog, I'd say I developed some semblance of a friendship with just a handful of my subjects. Sweetpea tops the list.

When I posted his tattoos, almost exactly a year ago today, he was actually contacted by several people who he ended up tattooing. I didn't realize it at the time, but the impact of the post was far greater than I could imagined.

A month or so later he e-mailed me and asked me what I thought of a design on his MySpace page. I checked out the sketch and admired the concept: a disembodied hand, gesturing the "om" sign, emerging from a cluster of flowers.

I told him I liked it, but if I were to get that tattoo, I'd prefer it be modified to exchange the Om for a Star of David.

He came back to me with the updated design and we agreed to get this done. Summer was just coming to an end. 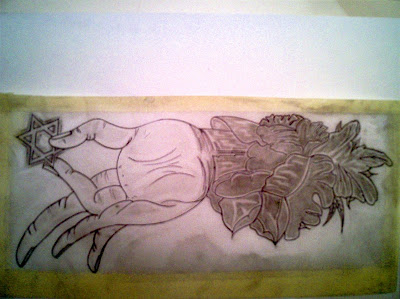 Pete stopped by in September with the design and met my wife, Melanie. The three of us talked about size and placement and agreed that it would look best on the upper part of the left side of my back. Sweetpea was basically freelancing and we decided the only place we could do it would be in my living room. The kids would certainly get an education out of this!

But when he called to see if we could book a slot in early October, a glance at my calendar revealed a conflict with a wedding and Yom Kippur the Jewish Day of Atonement. Not even factoring in the religious connotations, it's generally a bad idea to get a big tattoo on your back shortly before wearing a nice suit. Healing from a tattoo can be uncomfortable and the ointment used to facilitate the process can often ruin many an article of clothing.

So October slipped away, then November, and December. And then Sweetpea left the country for over a month and didn't get back until late January.

He called me in February. Not only was he ready, but he was now working out of Made in Brooklyn a little shop around the corner run by Michael Kaves, an artist steeped in the tradition of South Brooklyn music, graffiti art and tattoo culture (see an early Kaves tattoo here). I stopped into the store a couple of times and set a date.

When I showed up for the intial sitting, Pete was slightly tentative about the design. He wanted to go in a bit of a different artistic direction and wanted to retool the sketch one more time.

It was then that I suggested a chain, to make it look like it wasn't just a star that was being held, but a necklace with a star at the end of it, almost as if the hand had picked it out of the dust and held it up for inspection. Sweetpea loved the idea of adding the chain, as it created another dimension in the piece.

A week later, I was finally back in the shop being inked.

Again, I was reminded how time is distorted by reality TV tattoo shows. In a four to six hour session, the outline and flower was completed. For what was a relatively small piece, I was surprised at the time that the first phase took, until I saw the depth and layering of the colors that went into the floral pieces. 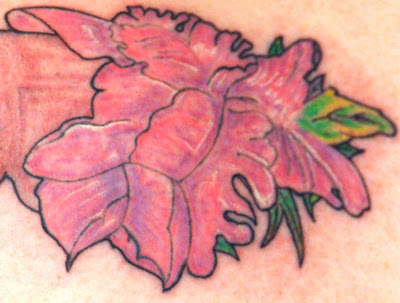 I returned two weeks later for the hand and several more hours under Sweetpea's needle....this time focusing on the hand, and the shading. When the session was complete, the hand was very dark, so much so that Melanie was nervous. 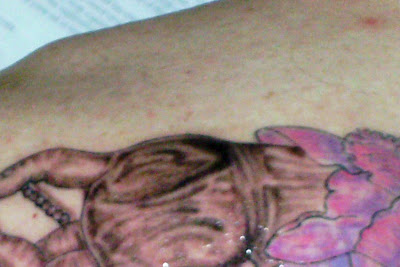 But Sweetpea assured us that the hand would lighten when healed, and lighten it did. It still amazes me how much work he put into the detail and shading and how he, along with the best tattoo artists, can envision the tattoo after it has healed. It's like an artist creating a painting, but with an extra layer that he knows will peel off and result in a crisper, brighter work below.

Due to scheduling and the shop getting busier, I wasn't able to sit again with Sweetpea until the second weekend in June.

I came in for some final touch-ups, a little extra tuning and coloring to slam the door on the tattoo.

I suggested some gold for the star to really make it shine, and he added some crisper outlining and some subtle shading to finish things up - white highlights in the fingernails and in the chain, and a little bit of added color in the hand.

And whereas I had been happy with the tattoo before, I was astonished at how much more amazing it looked with the "finishing touches". 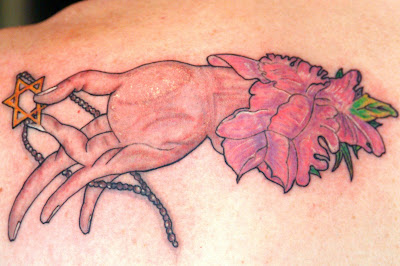 So what does this tattoo mean? I know that is a question I extend to the countless volunteers who offer up their ink to Tattoosday readers.

I believe that meanings change over time, as the context of a particular tattoo evolves.

The addition of the chain was significant. Instead of merely proffering a symbol, the hand extended a concrete thing that symbolized something larger.

I alluded to our discussion of the chain, as if it had been picked up and held up for examination. This forms the cornerstone of the tattoo's current meaning to me.

So here it is: the hand of a Higher Power, call Him God, or Yahweh, or another deity. The Star of David represents my faith, my understanding of Judaism. 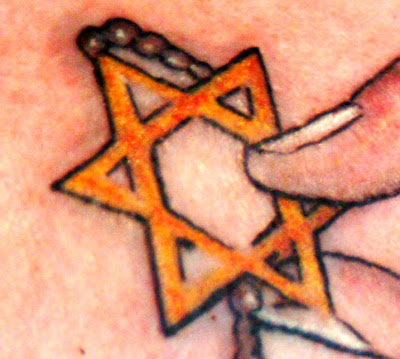 For many years, I had fallen away from the spirituality of the religion and had merely been a "cultural" Jew, meaning I identified myself as Jewish but didn't worship at the synagogue or observe many of the religious traditions.

But when my children reached the age when they started going to Hebrew School, the pendulum swung back and I became more regularly involved in the faith.

And although I do not consider myself "devout," my faith is stronger than it has ever been, it has been plucked from the dust and is being held up to the light.

There are other elements that pervade the tattoo that make it more complete to me, as well. I consider it a Judeo-Christian tattoo, in a sense, with a hint of Buddhism.

The hand is still held in an "Om" gesture, despite the modification. So it has a base in a symbol of peacefulness and meditation. The chain has almost rosary-like appearance to it, which is appropriate in that it represents to me the faith of the artist, and my deeper understanding of Christianity that developed over 13 years attending a Christian elementary and high
school.

I thank Peter Caruso aka Sweetpea for creating this amazing tattoo for me. He has told me that appearing on Tattoosday a year ago was a significant moment in his career, as well. In the middle of our second session, he had shared with me that his passion for tattooing had dwindled, and he had been thinking of hanging up his tattoo machine.

However, he said, my interest in the art of tattoo through the blog, and getting him talking about the history of Old School Brooklyn tattooing, rekindled the flame. He started tattooing again and, at Made in Brooklyn, he has been tattooing full-time, doing his own thing, and creating some amazing works of art.

This won't be the last time you hear of Sweetpea or Kaves or Made in Brooklyn here on Tattoosday. Their influence in my neighborhood is being extended on a daily basis. I have witnessed the phenomenal work that they are producing for others and I am sure to be featuring it here in the future. I also hope to bring you a closer look at the shop as they continue to grow the business and transform from a little shop around the corner into a Brooklyn institution.
Posted by Tattoosday at 6:05 AM

I honestly believe tattoo artists are some of the most interesting people to talk to because they come from all walks of life and have so many stories to share.