Our next tattooed poet is Christopher Arigo, who sent us this image from his thigh: 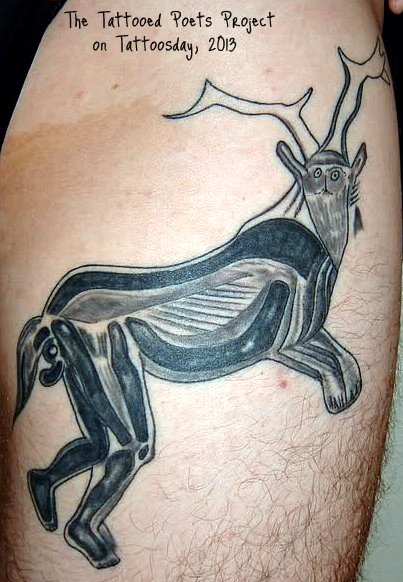 
Often referred to as “The Shaman” or “The Sorceror,” my tattoo is based on a sketch by Henri Breuil of a cave painting from a cavern in Trois-Frères, Ariège, France. Breuil, a French archeologist, claimed that the drawing/etching represented a Paleolithic shaman, a kind of happy hunting juju. I’ve always been intrigued by this particular image---I remember seeing a picture of it when I was fairly young, probably in some Time-Life book about cave art or something. For me, it represents a connection to our not-so-distant Paleolithic past and I do hunt, so maybe some of its juju will rub off. I have several other cave art tattoos, so it’s also part of an ongoing theme on my body. There’s something very visceral and ancient about it. There is also the question: why did they make this art?

The tattoo was done by Riley Baxter at Pussykat Tattoo in Las Vegas.

The poem that Christopher sent us keeps with the Paleothic theme:

Christopher Arigo’s first poetry collection Lit Interim won the 2001-2002 Transcontinental Poetry Prize (selected by David Bromige) and was published by Pavement Saw Press (2003). His second collection In the archives (2007) was released by Omnidawn Publishing. His poems have appeared in numerous literary magazines including Colorado Review, New American Writing, Barrow Street, and many others. He co-edits the literary journal Interim with poet Claudia Keelan and is an Assistant Professor of English at Washington State University.

Thanks to Christopher for sharing his tattoo and poem with us here on Tattoosday's Tattooed Poets Project!

If you are reading this on another web site other than Tattoosday, without attribution, please note that it has been copied without the author's permission and is in violation of copyright laws. Please feel free to visit http://tattoosday.blogspot.com and read our original content. Please let me know if you saw this elsewhere so I contact the webmaster of the offending site and advise them of this violation in their Terms of Use Agreement.
Posted by Tattoosday at 3:39 AM