The Tattooed Poets Project owes a debt of gratitude to the wonderful Dorianne Laux. Although not personally inked, she has, over the past five years, referred me to a number of writers who are, and who have likewise referred me on to others. Dorianne never disappoints and, this year, sent a poet named Matt Wimberley my way. Matt sent me this photo: 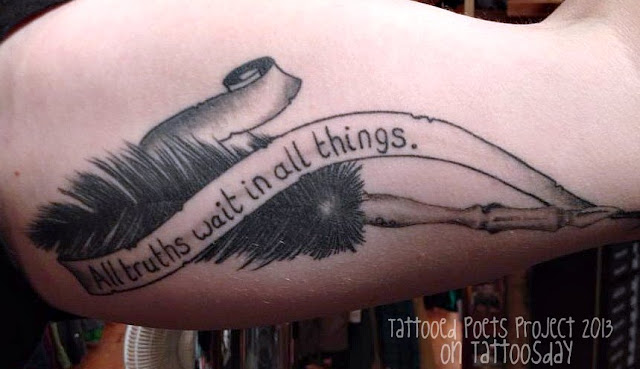 
"I got the tattoo in Boone, North Carolina at Speakeasy Tattoo, the artist was Greg Kinnamon. The line ["All truths wait in all things"] is from [Walt] Whitman's "Song of Myself". I got the tattoo when I moved from the mountains to NYC to begin an MFA at NYU. A reminder to look at the world with an open mind and appreciate the people I meet and places I go."

He also provided us with this tattoo-themed poem:

Ryan Gosling
has a tattoo from a page
of "the Giving Tree" on his arm
parallel to his heart. I've never
met him, but I bought the same
jeans he wears in the movie "Drive",
Levis 511's dark wash. My grandfather
worked for the denim mill
late in life, after time in Alaska
surveying for oil near the Arctic Circle.
He was young, his eyes
the same blue as glaciers
jammed in the permafrost of the Brooks Range.
In 1980 my grandfather started work
at Cone Mills, the same year
Ryan was born in Ontario.
The mill supplied Levi's
with all of their denim for a quarter century
until they closed down the same year Ryan
played a soldier in "The Notebook".
Two years ago my grandfather died
in a snowstorm, where the blue mountains
of North Carolina spread out like a quilt.
Today I'm drinking coffee in Brooklyn
overhead a flock of geese point their "V"
South out of Canada. On the table next to me
is a magazine article with a picture
of Ryan Gosling eating a sandwich
on a sun washed street. Ryan
who's read the same book I have
who wears the same jeans
my grandfather helped make
and whose heart goes on in his chest
the way all of our hearts do. One day
he'll die, and someone will write
about it in a magazine. It could be
years from now, it could be
tomorrow.

Matthew Wimberley grew up in the Blue Ridge Mountains of North Carolina. He served as an assistant poetry at the Raleigh Review and currently is studying poetry in New York University's MFA program. He was a finalist for the 2012 Narrative 30 Below Contest and his writing has appeared or is forthcoming in: Rattle, Puerto Del Sol, Birdfeast, and various other journals, including Connotation Press where his poems were introduced by Dorianne Laux. He has two dogs and spent March and April of 2012 driving across the country and back. Matthew resides in Brooklyn.

Thanks to Matt for sharing his poetry and tattoo with us here on the Tattooed Poets Project on Tattoosday!

If you are reading this on another web site other than Tattoosday, without attribution, please note that it has been copied without the author's permission and is in violation of copyright laws. Please feel free to visit http://tattoosday.blogspot.com and read our original content. Please let me know if you saw this elsewhere so I contact the webmaster of the offending site and advise them of this violation in their Terms of Use Agreement.
Posted by Tattoosday at 12:09 AM