One of the things that I love about our tattooed poets is that their is such a wide variety of tattoo photos - not just the tattoos themselves, but how the writers choose to represent their work in photographs.

Take our next tattooed poet, Darren C. Demaree, whose kids appear with his tattoo: 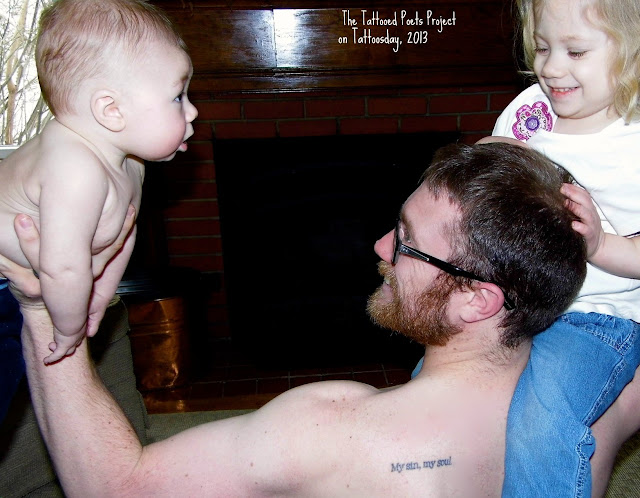 In case you can't make out the text on Darren's back, here's a closer look: 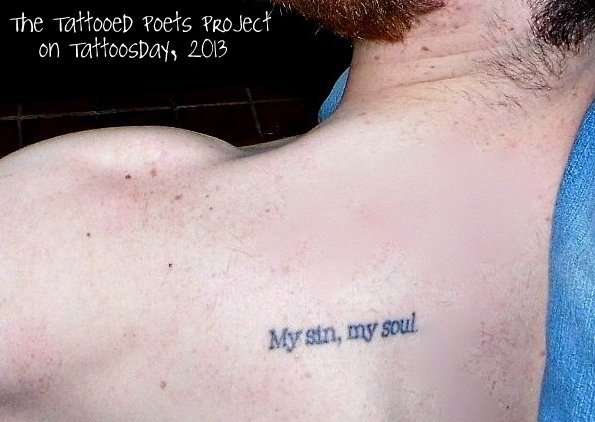 
"I got 'My Sin, My Soul', the second sentence from Vladimir Nabokov's Lolita, tattooed on my left shoulder blade when I was twenty-two at a tattoo place on the main strip in Wooster, Ohio. I was headed back to school for my last semester at the College of Wooster, and since my parents had just sent in their check for my last term, I was free from their threats to not pay for school if I got a tattoo. At the time I was in the middle of my senior project, which was adapting Nabokov's first novel Mary into a screenplay and a movie. I had spent the majority of that school year misbehaving, drinking too much, having too many girlfriends, and for me at that moment the sentence meant that I was claiming my own actions, recognizing and embracing these sins as my own, no one else's. Over the years, it has remained my favorite tattoo of my three, because it's meaning has morphed into what Nabokov has originally meant with those words, it means culpability and responsibility to me now. It means that though the spirit of my life has changed, my intention to celebrate all phases of my life remains, and though I no longer drink and am married with two kids, that wildness will forever be a part of me."

Darren send us the following poem, as well, which originally appeared in The Louisville Review and will be in Not For Art Nor Prayer, his second collection due out from 8th House Publishing House in 2014:

WE DID OUR BEST TO BREATHE INTO IT

Lung punctured, we did our best to breathe
into the sheep’s mouth, Emily even covered
the bloody hole from where the metal, shorn
from the fence post first stuck the animal,
stuck deep into the soft, red tissue, now unwilling
to expand the way it should. We did too much
for an animal we witnessed injured from our car,
did too much to bloody our clothes on Route 3,
while family waited for us to eat a holiday meal,
but we needed to save something then, needed
to put our mouths on something desperate,
fighting to survive with righteous intention. We,
yelling about sex, the having it, the not having it
enough, saw the spearing take the shoulder first,
then plunge deeper still, while Emily took the gravel
quickly and we burst from the car in shock.
The animal died before the farmer, the owner,
or the veterinarian could arrive, or pronounce hope
& I with my tongue warm from the expellant
of life looked at my lovely wife, her sweater torn
& I with my tongue, my tears only for the sheep,
asked her to hold me, despite my wavering hands.

Darren C. Demaree is living in Columbus, Ohio with his wife and two children. He is the author of As We Refer To Our Bodies (Spring 2013) and Not For Art Nor Prayer (2014), both collections are forthcoming from 8th House Publishing House. He is the recipient of two Pushcart Prize nominations. You can follow his writings through his website, www.darrencdemaree.com, or on twitter @ d_c_demaree.

Thanks to Darren for sharing his tattoo and poem with us here on Tattoosday!

If you are reading this on another web site other than Tattoosday, without attribution, please note that it has been copied without the author's permission and is in violation of copyright laws. Please feel free to visit http://tattoosday.blogspot.com and read our original content. Please let me know if you saw this elsewhere so I contact the webmaster of the offending site and advise them of this violation in their Terms of Use Agreement.
Posted by Tattoosday at 12:06 AM