Next up in the Tattooed Poets Project is Ethan Hon.

I met up with Ethan in the Carroll Gardens section of Brooklyn earlier this month and took photos of three of his tattoos.

Ethan credits the talented artists at Fineline Tattoo in Manhattan. 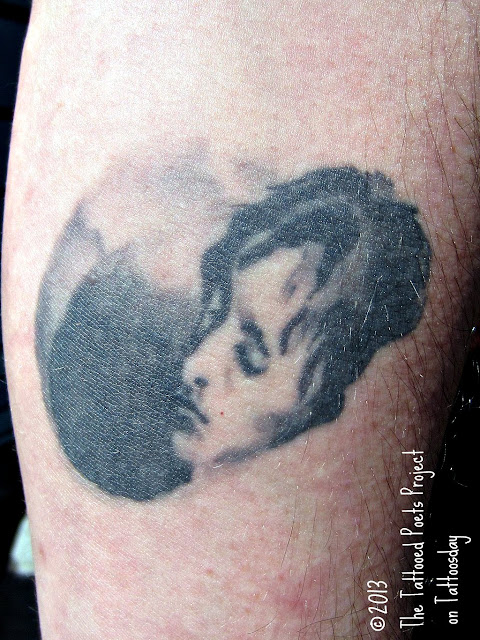 Ethan explained that "the tattoos of Keats [above] and f(x) [below] were done by Mehai Bakaty." He added, "Keats is self-explanatory [and] F(x) I got done as reminder to be a person, to function." 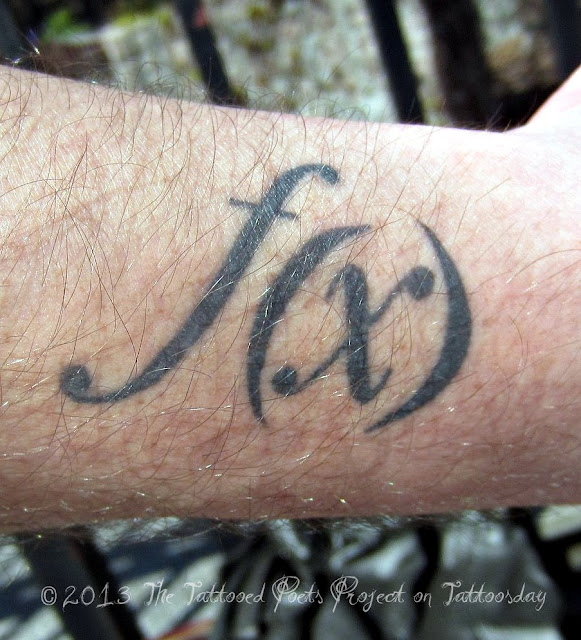 As for the third tattoo (directly below), Ethan explained, 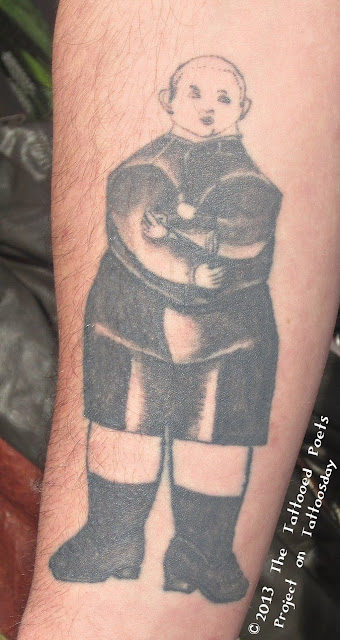 "Mike Bakaty tattooed Boy with Machine by Richard Lindner [and] was done because I couldn't stop looking at it and also because as Deleuze and Guattari remind us: A schizophrenic out for a walk is a better model than a neurotic lying on the analyst's couch. A breath of fresh air, a relationship with the outside world.

I have two other tattoos not pictured: Cascading black hearts and [one] of Ulysses with his dog once he has returned, along with the Arnold Geulincx phrase, 'Ubi nihil vales, ibi nihil velis' translated roughly as 'Where you are worth nothing, then you shall want for nothing' beneath it.

Ethan sent us this poem:

Jesus has dicks for hands
we must not tell him. Of course,
we will never tell him. Again,
or rather once, Dan walked, drenched
from New Jersey, home to New Jersey.
Last night I lay on the floor with a dog
named Pirate. Don’t tell Creezy.
When Santo told me his tattoo
was of his brother, I told him he should
never wear sleeves. It was not but
it was warm. I should only think
of things that are dripping with fuck--
across her lips, I did not negotiate a life
preserver. The world opens to my de-claring.
To have once been enamored is nice
but now I think everyone is divorcing,
Sail by me on your bicycles,
saying, “See you next Tuesday.”

Ethan J. Hon is from Omaha, Nebraska. He is a co-founder of JERRY MAGAZINE. His poems and prose have appeared or are forthcoming in Screen and Paper, TheThe, The New Inquiry, Dossier, Tin House, Cimarron Review, Cannibal, Nebraska Review, and Assembly Magazine. His paper “It Is Easier to Raise a Shrine than Bring the Deity Down to Haunt It: Beckett in the Blogosphere” was presented in June of 2011 at Samuel Beckett: Out of the Archive International Conference. He lives in Brooklyn, NY.

Thanks to Ethan for contributing to the Tattooed Poets Project on Tattoosday!

If you are reading this on another web site other than Tattoosday, without attribution, please note that it has been copied without the author's permission and is in violation of copyright laws. Please feel free to visit http://tattoosday.blogspot.com and read our original content. Please let me know if you saw this elsewhere so I contact the webmaster of the offending site and advise them of this violation in their Terms of Use Agreement.
Posted by Tattoosday at 2:59 AM

Nice one, really like the craftmanship on arms. trends for tattoo has started picking up in manchester too