Our next tattooed poet, Virginia Chase Sutton, is no stranger to tattooed poets projects - she appeared in Kim Addonizio's wonderful anthology Dorothy Parker's Elbow: Tattoos on Writers, Writers on Tattoos

She sent us this photo of one of her tattoos: 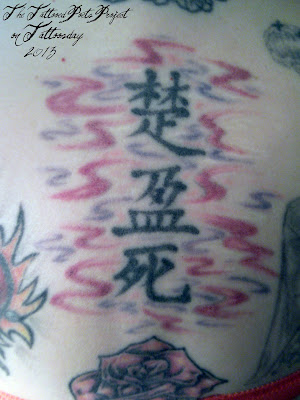 Virginia offered up this story about the birth of this tattoo:


"It may sound silly, but the symbols came to me in a dream. I was lightly dozing one afternoon and the symbols were behind my eyelids. I opened my eyes and knew what I had to do---get the symbols for Suffering, Ecstasy, and Death tattooed on my back.

The shop is called Rising Phoenix Tattoo in Addison, IL and the artist is Dave. I have been to Dave several times, even though I live in Arizona. This particular time, I was at a writers’ retreat in Illinois and knew I had to get the tattoo. I went with my god-son, Josh, who is in his late twenties. It is a long wait there as only Dave was there to manage the shop (we arrived at opening, noon). He had to answer the phone in mid-tattoo, pull off a glove, say 'Tattoo' and answer some basic question about hours, etc. then re-glove. If someone came in and wanted a piercing, he stopped the tattoo and did the piercing. So it took many hours to each get a tattoo. But it is worth it because Dave is a true artist."

She also sent along a poem related to this particular tattoo:

Out of town, on a new medication, a spill
down a flight of stairs,  strange bird
not quite flying. Limitless space. Off
to the ER. Careful, I tell the doc listening

to my lungs, here is a fresh tattoo. He steps
to the counter, back to me, says Do you have
any medical conditions? He already knows
from my forms but I reply I am bipolar.

He asks Do those lines mean anything? Three
symbols in Japanese are stacked on my back
in black lines with pink and purple wisps.
Suffering. Ecstasy. Death, I tell him. He turns,

startled. Why, he asks. What else is there, I say.
Bored with this discussion, I am thinking of Kawabata’s
poetic fiction, emblems I now have engraved
on my back. Influence for decades. What

is your psychiatrist’s phone number back home?
I bet you know it by heart. And I do. He pulls out
a cell phone, moves to the hall where I listen to
his take on my new tattoo. It is not a rave review.

I am miserable, wondering why so many docs
reject beauty, reject art. I think of the novel’s
main female character---there are only three---
a geisha and prostitute, Komoko. Of her traditional

loveliness, her isolation, her pain in a land of dense
and white-out snow, a forever landscape.
The ER doc hands the phone to me---my shrink
has a few words. You are on a long road, with

nothing but trouble ahead, he warns me, and changes
my med. He does not require a response.
The ER doc takes back the phone and there is more
chit-chat between them. Shimamura, the male character,

a dilettante, wants pure beauty and finds it in Yukio’s
reflection. In his brain, she is perfection. My back
burns, blurry as gathering rain. I am dismissed.
Standing outside the hospital, waiting for a ride

this winter night, I look up at the cluttered sky. Stars flare,
popping their skins. In the book, the Milky Way is
a living thing. Shimamura becomes incandescent
as he observes Komoko rescuing Yukio from a fire.

Komoko staggers; Yukio’s leg is burned by flames.
In the last image, the Milky Way slides down
Shimamura’s throat. It is what I look for in tonight’s skies.
Constellations rise, gleam, illusion I am able to capture.

I know it is not the Milky Way, but it will do as part
of my own mythology, the puzzle of existence:
Suffering. Ecstasy. Death.

"My first book is Embellishments (Chatoyant) and my second is What Brings You to Del Amo (University of New England Press). I’ve been published in The Paris Review, Ploughshares, the Antioch Review, Quarterly West, among other magazines, journals and anthologies. I won the Louis Untermeyer Scholarship in Poetry at Bread Loaf Writers’ Conference, the Allen Ginsberg Poetry Award, Writers at Work, and others. Six times nominated for the Pushcart Prize, I have also received three grants from Poets & Writers magazine."

Thanks to Virginia for sharing her tattoo and poem with us here on the Tattooed Poets Project on Tattoosday! For more of her poetry, head over to her website.


This entry is ©2013 Tattoosday. The poem and tattoo are reprinted with the poet's permission.

Wonderful poem, Virginia, and I like the tattoo. Glad to see you posting so much on FB lately!