Our next tattooed poet is Kazim Ali.

When I reached out to Kazim at the beginning of the year, he commended me on the "prescience" of my inquiry, stating "I am as yet unwritten upon but am planning said writing in the next week or two...".

So, when Kazim sent us this photo, the ink was still fresh: 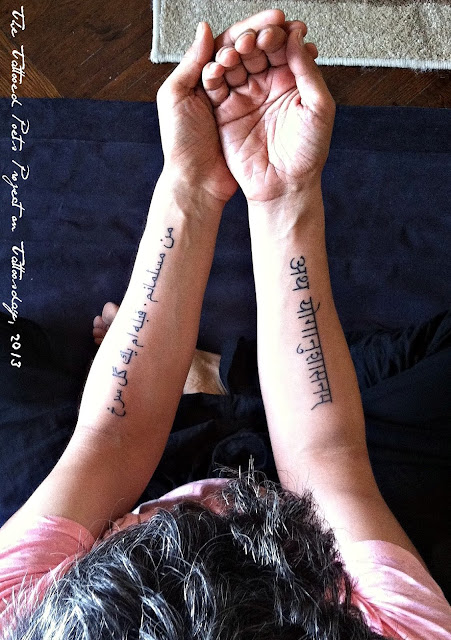 It's a great shot and when I first saw it, I was interested to hear what these lines of text were all about. Kazim didn't disappoint with this history:


"I have practiced yoga since 1999, never feeling more than a strict beginning, knowing less and less about yoga with every passing year. With poetry it feels the same. Though raised with traditional Muslim values, I struck out on my own to try to figure out God after encountering the work of Fanny Howe. From 2009-2011 I worked on my own book about yoga and Islam, called Fasting for Ramadan. While working on that book I came across and began translating the work of 20th century Iranian poet Sohrab Sepehri. One of his lines that resonates for me the most talked about the qibla, the direction of Muslim prayer--the direction toward which one must turn to face Mecca.

Sepehri's line (in translation) is roughly: I am a Muslim. My qibla is toward one single bloom of a rose.

Needless to say, my yoga practice taught me to always strive, to always try to know, that living (with or without a spiritual practice) is that exactly, a 'practice,' meaning 'process.' To write on the body is not permanent at all because the body is not permanent. To inscribe is to strive. The Farsi script runs right to left and the Sanksrit runs left to right. Each attempt at knowing oneself starts in the world, with others, in community, something I learn from both Islam and from Yoga.

I wrote on my right forearm the first line of the Yoga Sutras: Atha Yoganusanam. [in translation: Now (here, at this very moment in this very place) begin the teaching of yoga.]"

Kazim described how he came to know his tattoo artist:


"I met Sam McWilliams through my friend, Genine, also a poet. I wanted someone to write these sacred scriptures onto my skin and I wanted someone who would understand, if not the power of the scripture itself, then for sure the sacred quality of writing and of bodies. Sam had lived with Genine for a long while at the San Francisco Zen Center.

I went to Mermaids Tattoo, a special place where all the tattoo artists are women. We talked about the scripts and Sam said that while she had written Sanskrit before she had never written Farsi. I liked the idea of being in the hands of someone who knew her scripts but would be writing one for the first time. It felt like an occasion in the universe."

Kazim sent us this poem, which is an excerpt from a longer poem, which appeared in his book SKY WARD (Wesleyan University Press, 2013)

from "Journey to Providence"

Kazim Ali is the author of four books, most recently SKY WARD. He has also published two novels Quinn’s Passage and The Disappearance of Seth, two collections of essays, Orange Alert: Essays on Poetry, Art and the Architecture of Silence and Fasting for Ramadan: Notes from a Spiritual Practice, and translations of Sohrab Sepehri, Marguerite Duras and Ananda Devi.

His poems and essays have appeared widely in such journals as American Poetry Review, Kenyon Review, Hayden’s Ferry Review, Colorado Review, Denver Quarterly and the Harvard Divinity Bulletin. He edited the essay collection Jean Valentine: This-World Company and serves as co-editor of the Poets on Poetry Series and the Under Dicussion Series, both from the University of Michigan Press, contributing editor of AWP Writers Chronicle, associate editor of Field, and founding editor of Nightboat Books.

He is an associate professor of Creative Writing and Comparative Literature at Oberlin College and has served as visiting writer at many colleges and universities including Naropa University, St. Mary’s College of California, New England College, Texas State University, Western Illinois University, University of Michigan, University of Wyoming, the University of Southern Maine and Idyllwild Academy.

Thanks to Kazim Ali, not only for sharing his tattoos and poetry on the Tattooed Poets Project, but for taking the time to expound so thoughtfully on how he came to have this work done.


This entry is ©2013 Tattoosday. The poem and tattoos are reprinted with the poet's permission.

Posted by Tattoosday at 3:02 AM