Our next tattooed poet is Meghan Privitello.

She told us that


"I've always designed my tattoos myself. I usually have a very clear idea of what I want and where I want it, and don’t allow for much reinterpretation by the tattoo artist, unless, of course, the design will not translate well to skin. In that case, I have the utmost trust and faith in my tattoo artist to adjust the design as needed. I've had all of my work done at Rebel Image Tattoo in Rio Grande, NJ by Mike Siderio. He is probably the nicest guy in the world and does consistently beautiful work."

She sent us two tattoos, the first of which is this anatomic heart in a jar: 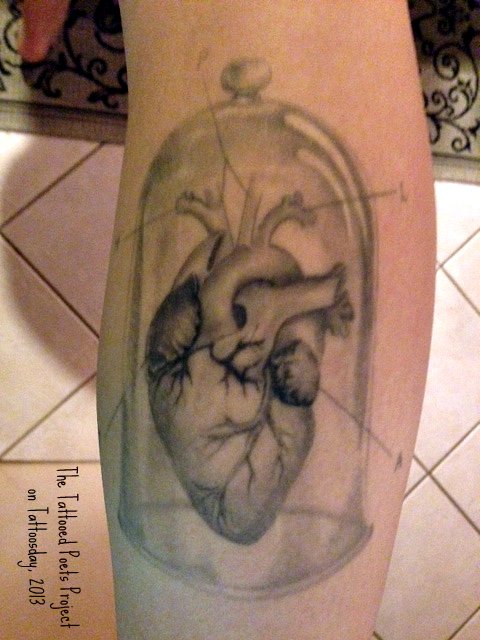 In explaining this piece, Meghan referred to it as her Sylvia Plath tattoo:


"My 7th grade English teacher told me about Sylvia Plath, and I read The Bell Jar, which undoubtedly made me an even stranger child than I already was. Plath was the first poet that I fell head over heels in love with, and who made me realize that being a poet was something that real people in the real world can do. It seemed obvious that I needed a Plath dedication tattoo. I wanted a bell jar since it was the first piece of hers I read, and I wanted an anatomical heart inside the jar because, as cliché as it sounds, she had captured mine. And since I also have an obsession with anatomy and diagrams, I had lines coming out from the heart as in an anatomical drawing with a letter at the end of each line, those letters being P-L-A-T-H."

The other tattoo she sent us was her "V Tattoo": 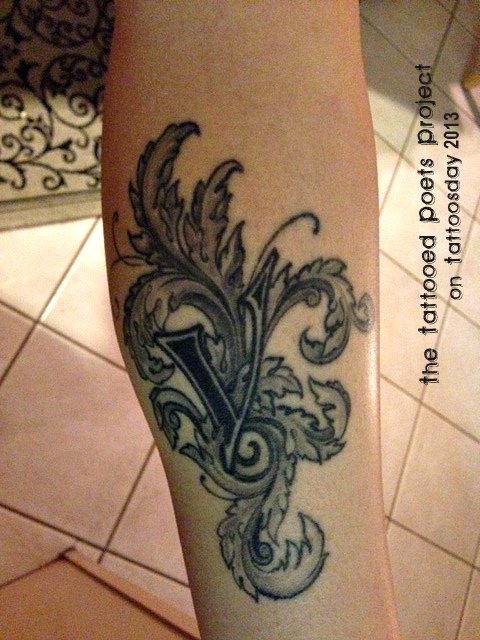 Again, Meghan gave us a thorough back story:


"I’ve always been fascinated and entranced by illuminated manuscripts. Pair that with an obsession with the alphabet, particularly with the letter 'V', and this tattoo is born. V is my favorite letter for a few reasons. 1) Whenever I try to think of words that start with V, they always seem to be words that hang on the fringe of decency and/or are embedded with violence (vagina, venom, venereal, vibrator, vulture, victim, etc.) I love that a letter can carry with it these associations before a word is even made from it. It is a powerful letter, and I can’t help but love it for that. 2) On the other end of the spectrum, or at least a good distance away from the first reason, is the meditative quality of the sound V makes. I love the vibration it makes on the lips, that it is another (somewhat darker) variation of an 'om'. 3) I love that V can be a child’s way of drawing birds, that it becomes a symbol of flight.

By way of a poem, Meghan provided us with the following:

Today it is yesterday in California.  I will not dress up as a wildfire or a tame woman.  I will not compare your memory to a palm tree.  I heard that eighteen starlings have died in eighteen weeks, which is something I associate with love.  The last time love undressed in front of me, I blushed I itched I regretted my name.  This means everything I want is getting closer.  Call me a fool, but I believe it when a man says he would rather die than sleep another night alone.  Every time I try to get where I belong, there is a detour.  Orange cones.  Dirty signs.  I have started confusing fate with duty.  I confused myself with an evergreen and finally considered myself beautiful.  In front of my home a man proposes to a truck and waits for an answer.  I bring him a soda hoping he’ll explode into some kind of destiny.  I’ve counted the toes of everyone I’ve known.  I’ve had dreams where having a child meant never catching my breath.  What does it take for a narrow passage to become a field?  How much longer until we open up to each other and cover ourselves with birds?  In California, I haven’t happened yet.  The thing I told you underneath the covers that sparked your interest is still afraid to die.
originally published in Sixth Finch

Meghan Privitello is a poet living in New Jersey. Her first manuscript, A New Language for Falling out of Love, has recently been a finalist for Alice James’ Kinereth Gensler Award and Persea’s Lexi Rudnitsky Prize. Her work has appeared or is forthcoming in NOÖ Journal, Sixth Finch, Redivider, Barn Owl Review, Bat City Review, Salt Hill Journal, Columbia Poetry Review, Linebreak, Quarterly West, Best New Poets 2012 & elsewhere. You can follow her on twitter @meghanpriv or visit her website: meghanprivitello.blogspot.com.

Thanks to Meghan for contributing to the Tattooed Poets Project on Tattoosday!