Today's tattoo comes to us from Megan Volpert: 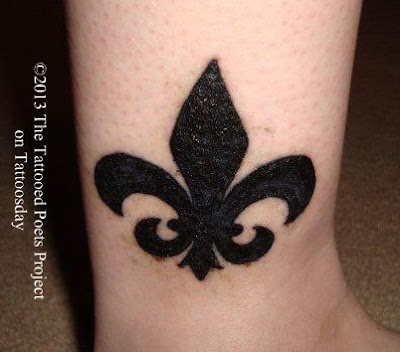 Megan explains the origin of this tattoo:


"The attached photo is of my right ankle, three days after I got a funeral tattoo for my great friend, Justin Hilbun. Justin died in a one-car crash in his early thirties, and was the first of my friends whose death I would classify as 'sudden' and 'too soon.' His jazz funeral was held in the French Quarter on 6-5-09, and I couldn't be there, so I got this ink for him that day instead. It's a fleur-de-lis, because that's the symbol of NOLA and when I think of Louisiana, I think of Justin. He was a very talented musician, and when he died, he was working on an album that you can listen to here: http://justinhilbun.bandcamp.com/.

The tattoo is just a straightforward tracing job, but I went to get it from a lady I'd worked with before: Danielle Distefano, the owner of Only You Tattoo [in Atlanta]. She wasn't there that day, and I had to get it done that day, so I went with Chuck Donoghue. I talked about Justin the whole hour, and Chuck really respected what I was there to do."

[Incidentally, Danielle Distefano's work appeared on the Tattooed Poets Project back in 2011, courtesy of the poet Noemi Soto, here.]

Megan also sent along this poem, adding it was written "a few years after getting the tattoo, which is also about that same space on my body and, in a way, about how I handled Justin's death":

They used to go behind my head. There were bony knobs that
would cut cleanly through glassine pools, step out soulfully
tanned and ready to run. Now my shoes feel too tight. Those
delicate corners have been rounded by the fat of a career and a
few too many loose cobblestone sprains. I wonder when I will
be able to predict a storm is coming, and want to define living
daylights. Attempt to circumnavigate the space of things that
have been scared out of you, and try to tie a rope around all
those things of which you used to be so certain. Use a mirror to
do it.


~ ~ ~
Megan Volpert is a high school English teacher who lives in Atlanta. The poem printed here is forthcoming in her fifth book, Only Ride (Sibling Rivalry Press, 2014). Predictably, meganvolpert.com is her website.

Thanks to Megan for her contribution to the Tattooed Poets Project on Tattoosday!

If you are reading this on another web site other than Tattoosday, without attribution, please note that it has been copied without the author's permission and is in violation of copyright laws.

Please feel free to visit http://tattoosday.blogspot.com and read our original content. Please let me know if you saw this elsewhere so I contact the webmaster of the offending site and advise them of this violation in their Terms of Use Agreement.

Posted by Tattoosday at 4:00 AM

Labels: Memorial, Only You Tattoo, Poets, The Tattooed Poets Project