Our next tattooed poet is Josh Fernandez, who estimates he is about 40% covered. "At this rate," he says, "I'll probably end up with just my natural face and the rest covered in ink." I am grateful to the poet Tim Kahl, who is un-inked, for sending me Josh's way.


"It took a long time to cast aside my lust for drugs that seemed to plague me all the way up until my 30s. Even then, it wasn't until I began writing for publications that I realized I actually had a purpose and a shot at life.

After burning out on journalism, I began teaching writing at a community college. It’s a career job, something I've never had before. In retrospect, I guess journalism was almost a real job, but it’s the clown car of professions, packed to the brim with wacky but ultimately depressing characters (addicts, sociopaths, egomaniacs, loudmouths, etc.). I fit in quite well. Teaching, however, is a different world entirely. For the most part, you need to be a professional, which, to be honest, I don’t even know what that means. I’m not sure where I fit.

While I’m no longer a drug-addled wanderer, I still consider myself unprofessional—still kind of a fuckup. I suppose I tattooed my body to keep myself separated from the non-fuckups. On my fingers are the words “OUT OF STEP” with a picture of a little black sheep (Royal Peacock, Sacramento, CA)... 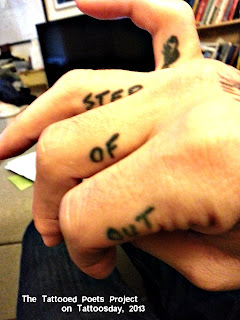 ... a tribute to the hardcore band Minor Threat—an indicator of my place in society.

On my hand is a cartoon version of my cat Loki, the chief of our house (Char Hall, Sideshow Studios, Sacramento, CA): 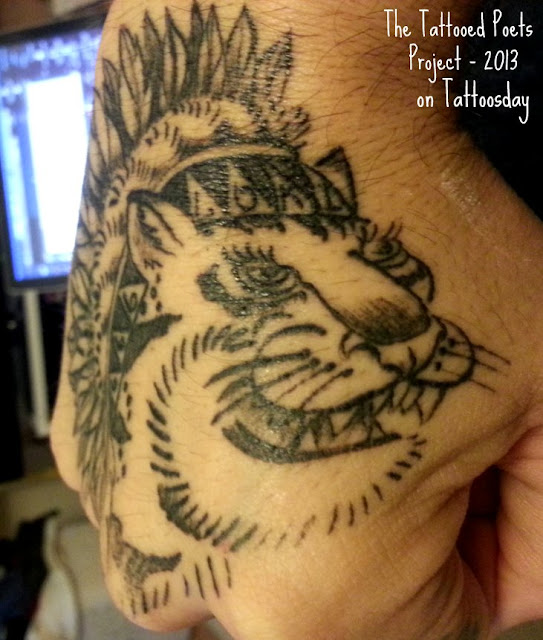 On my inner calf is a portrait of Emily Dickinson (Beau McCoy, Capital Ink Tattoo, Sacramento, CA), a fearless writer who I believe to be one of the original punk rockers. 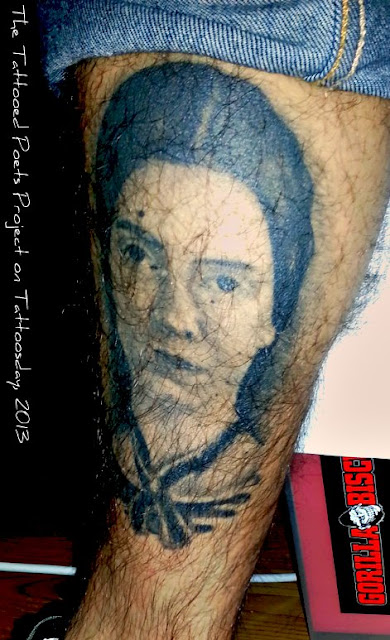 And on my forearm is a typewriter (Lucky 13, Oakland, CA), a reminder that I have approximately one skill. 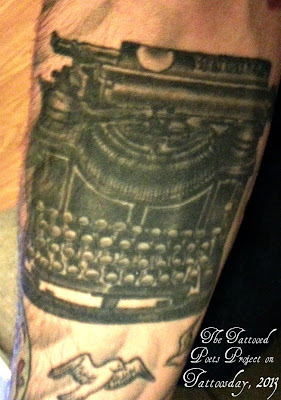 It's not often we get to share tattoos inspired by Emily Dickinson and a punk rock band in the same breath, so we were happy to post everything Josh sent our way.

Josh also sent us several poems and I picked two.

He takes root
—feet, planted
firmly in the soil , kneeling
against the Earth,
banging until his fists
bloom
into tulips.

The Last Thing He Said

“Be proud because we’re Mexicans,
and if they
don’t like it, just turn
your head and walk away.
If you haven’t noticed, mijo,
this world goes on
in every goddamn direction
whether you want it to
or not.”
And just like that
he was gone
—a trail of weed smoke and wisdom,
wagging into the horizon.

And to this day, a scruffy
cholo with brown
skin and a bad leg
limps past
and my eyes sliver
like closed doors and I have to sit
down for a second—thoughts
rushing past, like speeding trains
in the night.

It’s almost too much
to think of the gristly days,
that bus ride from Sacramento
to Boston where I sat, tweaked out,
for a week on a Greyhound,
too wired and poor to eat.
He waited at the station
for seven days with two black eyes,
a set of brass knuckles
and a warrant for his arrest.

It’s too much to think
about when grandma
asked him to recite a prayer
and for the first time in 20 years
he put down his glass
and cried the way Mexicans do
when they find out there is
no God:

And after that we wiped away
our tears, forgot how to speak Spanish
and got drunker
than we’d ever been,
spilling out of that
East Los apartment
into the world
like masses of hot lava
burning up our livers
till the frustrated sun
tucked itself
into the cool bed of morning.

A life full of discarded things
is what we were given. Humans,
like old bibles, lie
tattered, dirty and useless.
I wonder what he is doing now
My father, the broken schitzo
who wore his sickness like
a neon coat.

Walking through this shithole
of a city,
Nina Simone ripping
my heart out
through an old pair of headphones,
I watch a dirty black mutt
sitting in a junk yard
so stupid in his world
of chain link and bone scraps,
rags and old iron.

If you were here I’d tell you I miss you
and that there’s not much news
save for a funny headline
telling us about some frumpy
rube in Arkansas who found
Mother Theresa’s tit
poking out of her pancake.
And, in this way, unwise and reckless, without you
unholy father,
if you haven’t noticed,
this world goes on in every goddamn direction,
whether you want it to
or not.

Josh Fernandez was born in Denver, raised in Boston and now lives and works in Midtown Sacramento. He writes for Spin, Boulder Weekly, San Antonio Current, and the Sacramento News & Review and teaches writing at Sacramento City College. He was nominated for a Pushcart Prize in 2011. Fernandez’s first, full-length collection of poems, Spare Parts and Dismemberment, is available from R.L. Crow Publications. 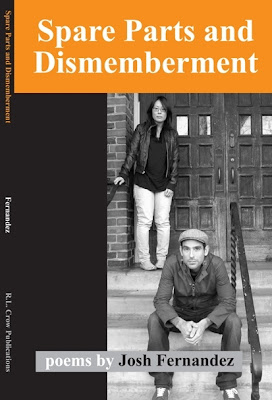 Thanks to Josh for sharing his tattoos and poetry with us here on Tattoosday's Tattooed Poets Project!

This entry is ©2013 Tattoosday. The poems and tattoos are reprinted with the poet's permission.

If you are reading this on another web site other than Tattoosday, without attribution, please note that it has been copied without the author's permission and is in violation of copyright laws. Please feel free to visit http://tattoosday.blogspot.com and read our original content. Please let me know if you saw this elsewhere so I contact the webmaster of the offending site and advise them of this violation in their Terms of Use Agreement.
Posted by Tattoosday at 3:07 AM