Our next tattooed poet is Jim Elledge, who sent us this snapshot: 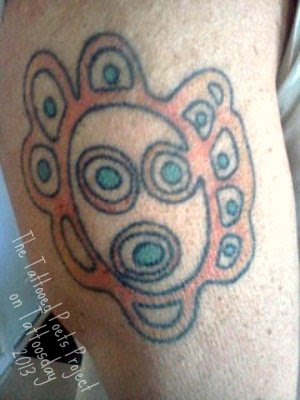 Jim explains how he came to get this tattoo:


"Several years ago, my partner and I went to San Juan, Puerto Rico on vacation and fell in love with it. The following summer, we bought an apartment in the Santurce neighborhood of San Juan, and if all goes well, we’ll be moving there to live permanently in three years. One day at the Museo de Arte de Puerto Rico, I found a petroglyph of the Taíno sun deity. (The Taínos  were the indigenous people of Puerto Rico and other Caribbean islands who were thriving before Columbus’ arrival.) As soon as I saw the petroglyph, I knew I wanted it as a tattoo, and before leaving the island, I went to Harisumi Tattoo Parlor & Body Piercing on Avenida Ashford and had it done. Although I was a little concerned about being accused of appropriating Puerto Rican/Taíno culture, which, I have to admit, I did, I’m constantly stopped on the street or the beach by Puerto Ricans who tell me how wonderful the tattoo is."

Jim sent us the following poem:

Tick-tock: Night limps by, and the martini
Mister stirred twelve full seconds reflects him—
tight, not drowned. Hours before, the key lime
pie made him pucker, the cheap Chianti
made him woozy, the waiter made him hard,
getting wood made him feel visible—but
to himself, not to God, who’s so blissed out
a sparrow distracts Him. (Mister knocked loud!)
And Satan’s so fixated on cheap tricks,
he’s absent, too. Faithful and heretic,
poor Mister punches the Reaper’s time clock,
gnaws bones and laps booze as the bright oceans
slap continents, and paces while tick-tocks
multiply. Then he passes out undone.

Jim Elledge’s H, a collection of prose poems, was issued by Lethe Press in 2012, and his A History of My Tattoo: A Poem won the Lambda Literary Award in 2006. His poems have appeared in many journals, including Barrow Street, Chicago Review, Denver Quarterly, Hayden’s Ferry Review, Hotel Amerika, Indiana Review, North American Review, Paris Review. His Henry Darger, Throw-Away Boy: The Tragic Life of an Outsider Artist is forthcoming in July 2013 from Overlook Press.

Thanks to Jim for sharing his tattoo and poem with us here on Tattoosday!

Posted by Tattoosday at 3:00 AM