Although it is April and we are posting the tattoos of thirty poets over the thirty days, it's hard to ignore the good people who make Tattoosday possible, my fellow inked New Yorkers, and visitors from afar.

It's even more difficult to ignore the unseasonably warm weather and the resulting flurry of tattoos that reveal themselves after a cold and inhospitable winter.

So it is with pleasure that I can share some tattooed folk who are not necessarily poets, to go with our inked writers.

Take for instance, Siobhan (pronounced shuh-vawn for those unfamiliar with this Irish name), who walked by me in my neighborhood in Brooklyn, flashing this recognizable tattoo: 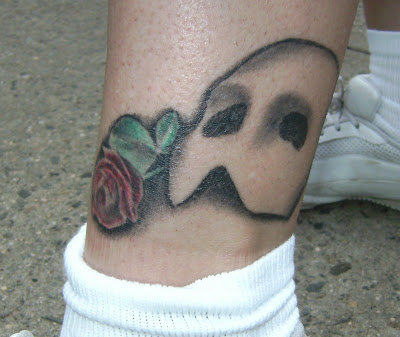 Perched above her left ankle, this design is based on the artwork for the widely-popular Andrew Lloyd Webber musical, The Phantom of the Opera. 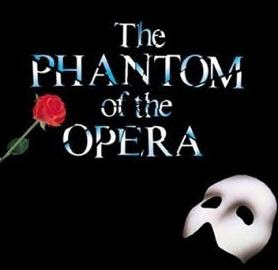 You would imagine that someone who would go so far as to tattoo their leg with a show's artwork would be a huge fan. You'd be correct.

Siobhan informed me that (as of April 2010), she had seen Phantom over twenty-five times, including productions in Minneapolis, San Francisco, London and, of course, on Broadway.

This is her first tattoo and was inked by Joe Mags at Brooklyn Ink, in Bay Ridge. Work from Joe and the crew at Brooklyn Ink has appeared quite often on Tattoosday, and can be seen collected by clicking here.

Thanks to Siobhan for sharing her inspiring tattoo with us here on Tattoosday!
Posted by Tattoosday at 3:01 PM