Today's tattooed poet is Erica Rivera from Minneapolis. She sent along this lovely photo: 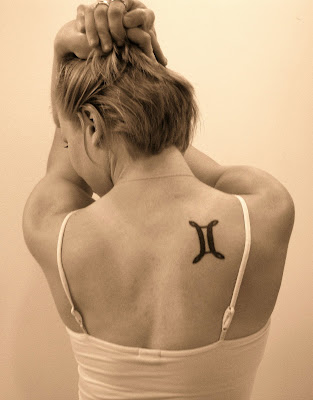 "This tattoo was both a 24th birthday present to myself (and perhaps a mini-rebellion after my divorce as well). It is the astrological symbol for Gemini, which I chose because I embody the twin personalities Geminis are infamous for. 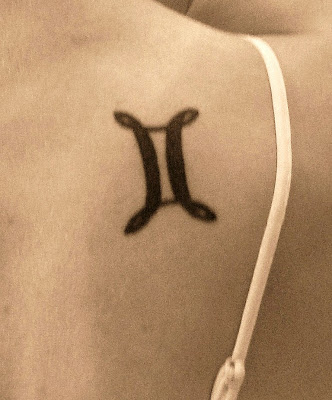 The tattoo was done at the Ink Lab in Minneapolis by a man whose name I know longer remember but recall as being very gentle, especially since this was my first time. I’ve since gone on to get four more tattoos: another astrological symbol on my forearm and three emblems from the marathons I’ve completed on my ankles."

Erica Rivera is the author of Insatiable: A Young Mother’s Struggle with Anorexia (Berkley, 2009). She is the former first-place winner of the Powderhorn Writer’s Festival and her poetry has appeared in Moon Journal, The Mirage, and Writer’s Journal. She blogs at http://www.maneaterbook.com/blog.htm.

Head on over to BillyBlog to read one of Erica's poems here.

Posted by Tattoosday at 5:56 AM