Today's tattooed poet, Seth Berg, is very tattooed. Not only does he say he is "extensively tattooed," he qualifies such a statement: "over 60 sessions under the needle".

He sent several photos, but the most impressive and, from what I can tell, his most special one is this "mammoth beast" of a tattoo (his words, not mine) on his ribcage: 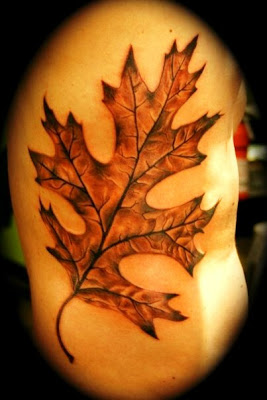 In case you were wondering, this amazing leaf "goes from [his] pelvic bone to [his] armpit and blankets [his] entire ribcage".

The tattoo is an oak leaf, inked in celebration of his son, Oak, who turns 1 on May 8th. 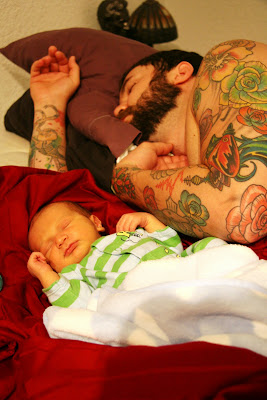 The tattoo was completed in one six-hour session (with only one break for water and a stretch). The artist was Kat Richards from Live Fast Die Young Tattoos in Northeast Minneapolis.

Seth Michael Berg earned his MFA in poetry from Bowling Green State University in 2003 and has since been bouncing around the country teaching, tending bar, sculpting, writing, and occasionally snowshoeing. His poems and fiction can be found in Connecticut Review, Lake Effect, Word Riot, JMWW, 13th Warrior Review, Chiron Review, BlazeVOX, Pike Magazine, Disappearing City Literary Review, and Dark Sky Magazine, among others. Berg lives in Minneapolis with his photographer wife, Ashley, their supernatural son, Oak, and their twelve-year-old English Bulldog, Bob. When not working, Berg can most likely be found indulging his addiction to hot sauce or slowing down somewhere in a forest.

Check out his poem "Aphasia" over on BillyBlog.
Posted by Tattoosday at 6:25 AM

...and I love the name that he chose for his son..Oak, what a really strong, unique name!