Today's tattooed poet is Amber Clark, whose tattoo is not only on a poet, but is itself a line from a poem: 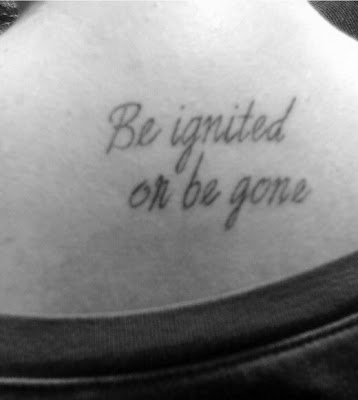 This tattoo is om Amber's upper back, just below the neck. Amber explains how this tattoo arrived to become engraved in her flesh:

"The artist was Randy Ford at Maverick's Tattoos in Destin, FL. He is soft-spoken, gentle and engaged. He also gives guitar lessons. We talked at length regarding the nature of his work - in effect, branding people permanently, acting as conduit for the indelible. And I remember thinking that we both attempt to act in the world in very much the same way; he with ink, I with writing. This is brand new; I got it in January 2010 as a 34th birthday present to myself because I found this line of Mary Oliver's poem returning and repeating in my mind again and again over the years, like a mantra. It pushes me to create, to make, to be engaged with the world - which is both ironic and (maybe) shamefully delightful. Of course, I joke about the shame, but given the context of the poem, the connotations of 'mantra' seem silly."

The following is Ms. Oliver's poem that inspires so:

What I Have Learned So Far

Meditation is old and honorable, so why should I
not sit, every morning of my life, on the hillside,
looking into the shining world? Because, properly
attended to, delight, as well as havoc, is suggestion.
Can one be passionate about the just, the
ideal, the sublime, and the holy, and yet commit
to no labor in its cause? I don’t think so.
All summations have a beginning, all effect has a
story, all kindness begins with the sown seed.
Thought buds toward radiance. The gospel of
light is the crossroads of — indolence, or action.

Be ignited, or be gone.

Please head over to BillyBlog to read one of Amber's poems here.

Amber Clark teaches English and literature at Northwest Florida State College as well as Gulf Coast Community College. She reads for Tin House, and she will be guest judging the Scratch Poetry Contest in June 2010. While most of her own work can still be found on napkins and matchbooks, in personal journals and private word docs, and on the windshields of friends' and lovers' cars, most recently, her work can also be found in Pebble Lake Review, SandScript, Slow Trains, Underground Window, and Poetry365. A graduate of The College of William & Mary and The Radcliffe Publishing Institute at the Center for Advanced Study at Harvard, she also holds a MFA in Creative Writing from Queens University at Charlotte.

Posted by Tattoosday at 5:51 AM

Haha! Not exactly engaged anymore ;) Thank you for the rave review though!