Someone recently asked me where I find all of these tattooed poets. A great question, and I owe thanks to many people, for most individuals come by way of word-of-mouth from other poets. But I also reach out on my own, often sending dozens of e-mails to writers around the country, and the world. It's like shooting an arrow into the dark, one can only hope the missive strikes a target.

I was recently poring over a copy of the anthology Poetry Daily Essentials 2007 and picking poets to e-mail. I stumbled across Alexandra Teague's "House Guest" and sent her my standard "ink-query." And sure enough, she became one of the few poets I wrote to out of the blue who replied because, not only is Ms. Teague tattooed, one of them is poetry-related. As she so aptly put it, "I sort of had to reply to you."

I was inspired to get the Japanese kanji for "poetry" after seeing a pin at the Poetry Magazine table at the Association of Writers and Writing Programs conference in 1999. 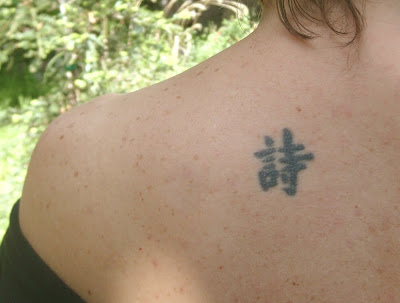 I'd been thinking about getting a tattoo and couldn't decide on a design, but as soon as I saw the kanji, I knew it was exactly right. I see it not only as a symbol of the art of poetry but also as a reminder to live poetically. I got the tattoo at a shop in Miami (I don't remember the name). I did a bit of research to confirm that the kanji was correct (since I don't know any Japanese), but I didn't have it really confirmed until several years later when a new friend, from Japan, said, "Do you know what your tattoo says?" And I said, "I hope so." Fortunately, according to her, it really does mean "poem" or "poetry."

She also shared this lovely tattoo: 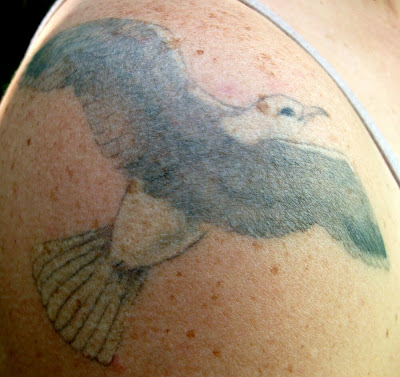 The other tattoo is a couple of years old. It was done by Amy Justen at Sacred Rose Tattoo in Berkeley, California. I've always loved the ocean and wanted to live by the coast, so the California seagull is symbolic for me of my migration out West. Amy Justen has a background in fine art and does some really interesting, painterly work with white and grey, which I love, but which made some people think the tattoo was a decal when I first got it!

Be sure to head over to BillyBlog to read one of Alexandra's poems here.

Alexandra Teague’s first book of poetry, Mortal Geography, won the Lexi Rudnitsky Prize and has just been published (April 2010) by Persea Books. Her work has also appeared in Best New Poets 2008, Best American Poetry 2009, and The Yale Anthology of Younger American Poetry, as well as journals including The Missouri Review, The Iowa Review, and New England Review. She was born in Fort Worth, Texas, and has since lived in Arkansas, Missouri, Florida, Montana, Hawaii, and California. She currently teaches English at City College of San Francisco and lives in Oakland. For more information about upcoming readings and publications, visit www.alexandrateague.com.

Thanks to Alexandra for sharing her tattoos with us here on Tattoosday!

Posted by Tattoosday at 9:23 AM