Today's tattoo comes to us from Aaron Anstett who had also initially inquired about joining us last year on the Tattooed Poets Project.

Although the quality of the image may have a lot to be desired, the age and nature of the tattoo make it worth a peek, in my opinion: 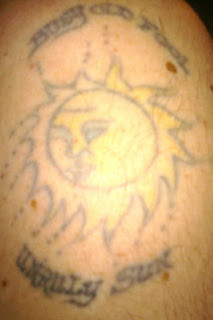 "The main image was based on an illustration by a college girlfriend and applied nearly two decades ago, at a tattoo parlor outside of Iowa City, Iowa (at that time, I don't recall there being a shop in town, but who knows). The words from [John] Donne's The Sun Rising were applied a couple years after that, at a shop in Houston. Donne has long been among my favorites, though other poems more so with the passing of time."

It should be noted that "BUSY old fool, unruly sun" are not merely words from the poem, but the memorable opening line. You can read the whole Donne poem here. 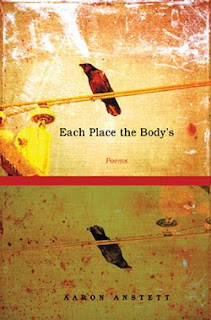 Aaron Anstett's collections are Sustenance, No Accident (Nebraska Book Award and Balcones Poetry Prize), and Each Place the Body's. He's completing the last weeks of his term as the inaugural Pikes Peak Poet Laureate and lives in Colorado with his wife, Lesley, and children, Molly, Cooper, and Rachel.

Head over to BillyBlog to read one of Aaron's poems here.

Thanks to Aaron for sharing his tattoo with is here on Tattoosday!

Posted by Tattoosday at 7:00 AM