One of the more satisfying aspects of this year's Tattooed Poets Project has been completing posts for poets who first contacted me in 2009 during our inaugural year of the endeavor.

In Brendan Constantine's first e-mail to me, back in February 2009, he mentioned being "extensively tattooed," a fact that, over the last thirteen months, escaped me. Brendan and I have stayed in touch, and he was finally able to send me a photo last night of one of his tattoos. I was surprised to see this amazing back piece: 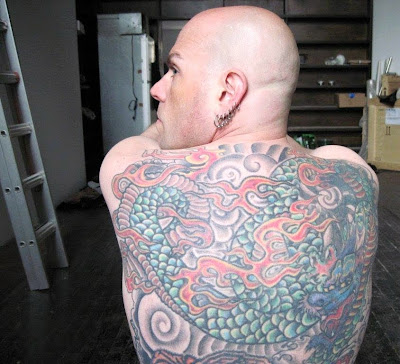 Photos by Shawn Burkley
Brendan explains how this work came into existence:

"In 1994 I went to an retrospective of legendary Japanese artist, Kawanabe Kyōsai, at the National Gallery in London. Known as the ‘Demon of Painting,’ Kyōsai was among the very first artists in his country to bring western techniques to bear upon traditional themes, a move which earned him much criticism. I was transfixed by his work and came home with a huge book of his prints. Artist, Kirby White, then with Yoni Tattoo in the San Fernando Valley, shared my enthusiasm for this unique painter and said, “I would kill to work in this style!”

Unfortunately, halfway through the process, Kirby began to experience chronic back pain which ultimately kept her from finishing the piece. Nevertheless, I asked that she sign it, something few if any people allow artist’s to do. I know the work is supposed to be its own signature, but I wanted the piece to bear Kirby’s mark the same as if it had been rendered on rice paper. 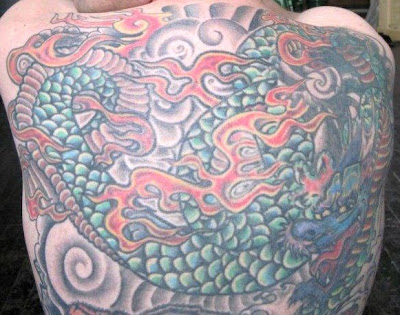 About two years later I met artist Sung Song at Pure Tattoo in Los Angeles (he has since moved on, now at Unbreakable Tattoo in Studio City) and discovered he was also devoted to the work of Kyōsai . I showed him where Kirby left off and he enthusiastically finished the job, adding his own improvisations while respecting Kirby’s work. The piece now bears both their idiographic signatures as part of the design. I’m a happy gallery!" 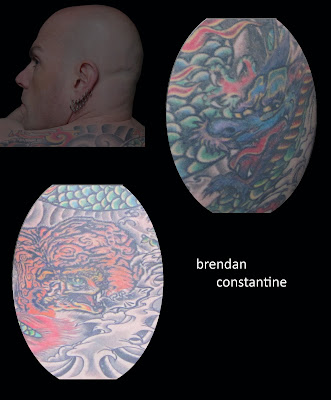 Photos by Shawn Burkley
Thanks to Brendan for sharing this amazing work!

Please be sure to head over to BillyBlog to read one of his poems here.

Brendan Constantine is a poet based in Los Angeles. His work has appeared in numerous journals, notably Ploughshares, Ninth Letter,The Cortland Review & RUNES. His book, Letters To Guns, was released in 2009 from Red Hen Press. He is currently poet in residence at The Windward School and Loyola Marymount University Extension.

Posted by Tattoosday at 5:27 AM