This is a bit of an unusual submission, as it was provided on behalf of Joseph by his wife, the poet Dorianne Laux. Dorianne, who herself is un-inked, was instrumental in last year's Tattooed Poets Project, referring me to several tattooed poets, who in turn introduced me to many more, acting as the lead domino in a fantastic tattooed poet domino effect.

This is the tattoo she provided on behalf of Joseph: 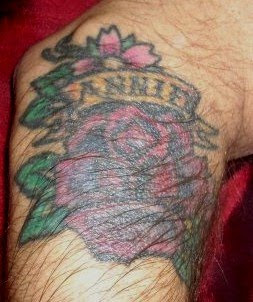 Dorianne explains that this tattoo is actually a two-part piece. The original was "a much smaller rose" by the legendary Lyle Tuttle. She continues:

"The banner was etched with his second wife's name, which I never saw as a problem. I liked his ex-wife who is an artist. In fact, her painting graces the cover of my third book, Smoke. One night he came home late with a bandage on his arm. I worried he'd been in a work-related accident. He peeled it back to show me he had the rose enlarged and my name stenciled into the new banner by Doctor Julien of [Julien's Black Lotus Tattoo in] Eugene, Oregon. I wish I could tell you I thanked him and kissed him, but what I did was sock him in the arm and call him an idiot. Secretly, I found I was pleased."

Be sure to head over to BillyBlog and read one of Joseph's poems here.

JOSEPH MILLAR is the author of Fortune, from Eastern Washington University Press.

His first collection, Overtime (2001) was finalist for the Oregon Book Award and the Robert H. Winner Memorial Award from the Poetry Society of America. Millar grew up in Pennsylvania, attended Johns Hopkins University and spent 25 years in the San Francisco Bay area, working at a variety of jobs, from telephone repairman to commercial fisherman. His poems have appeared in numerous magazines including The Southern Review, TriQuarterly Review, Prairie Schooner, Shenandoah, DoubleTake, New Letters, Ploughshares, Manoa, and River Styx. His work has won fellowships from the National Endowment for the Arts in Poetry, Montalvo Center for the Arts, Oregon Literary Arts and a 2008 Pushcart Prize in Poetry. In 1997 he gave up his job as a telephone installation foreman. He now lives in Raleigh, NC and teaches at Pacific University’s Low Residency MFA Program in Oregon and yearly at the Esalen Institute in Big Sur, CA. Pulitzer Prize winner Yusef Komunyakaa has said, “There's a tenderness at the core of Fortune, where the commonplace becomes atypical and fantastical, and each poem possesses a voice that summons and reveals. Joseph Millar is a poet we can believe.” His third collection of poems will be published in fall of 2011 by Carnegie Mellon Press.

Thanks to Joseph and Dorianne for their collaborative submission to the Tattooed Poets Project!

Posted by Tattoosday at 5:32 AM