Although the plan is to introduce new poets in this year's Tattooed Poets Project, there will be a few return visitors from last year. Adam Deutsch is one of those exceptions.

In last year's post, in which Adam shared some incredible Miltonian work, he alluded to the fact that he also had a full sleeve inspired by Ralph Waldo Emerson's Transcendental Man. I mean, how could we not bring Adam back to share that?

A closer look shows the mountains wrapping around the upper arm: 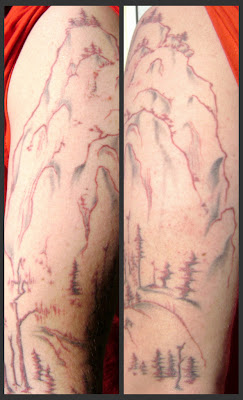 "That moment where 'the currents of the Universal Being circulate through me' is too important to forget. Rather than have the text tattooed, I went with this image--which is an adaptation of a caricature by Christopher Cranch of the transparent eyeball. 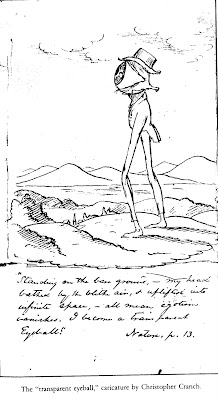 I was moved by the image. Beside Emerson, I was reading the Bhagavad-Gita and Bashō. It seemed fitting to have the sky above 'the lover uncontained and immortal beauty' blend into the water at the base of a mountain that peaks at the shoulder.

Like Adam's other work, this piece was done by Sunday Dawne-Marie at Lark Tattoo in Westbury, New York. Adam elaborates on the process:

"We decided that the simple line-art style make it seem less like art on the body, and more like art in the body. The red is a mixture of colors. I had just the red for about 3 years, and went back for the shading in late 2008--everyone would see it peeking out of a sleeve, and they thought I either cut myself, or had a scar from some kind of accident. When I came in and said 'I think we can use some shading. A little depth,' she said, 'That's what I told you 3 years ago.' So, it was two sittings, about 3 hours apiece. Because it's an uncommon style, I booked the last appointment of the day so she could take her time with it. I trust Sunday to no end with ink."

Work from Lark Tattoo has appeared previously on Tattoosday here.

Adam Deutsch was born on Long Island, New York and has his M.A. from Hofstra University (2005) and M.F.A. from University of Illinois at Urbana-Champaign (2008). He's been on the editorial staff of a number of presses and journals, including Ninth Letter and Barn Owl Review. He presently works in higher education all over San Diego, and is the editor of Cooper Dillon Books.

Check out a poem from Adam over at BillyBlog here.
Posted by Tattoosday at 5:05 AM