Today's tattoo comes to us from the poet Mark Nickels: 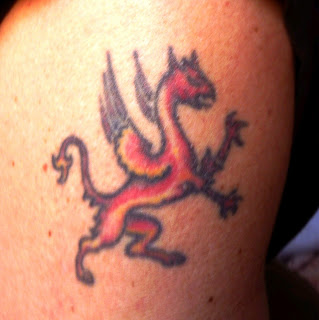 "This tattoo dates from the end of the Clinton era, I'm thinking 1997, 1998. It can't be true, but getting a tattoo feels like the last unmotivated thing I did. No regrets, I just can't remember exactly what it was all about. You forget about it and then glimpse it in your steamed bathroom mirror and think, Oh. Uh....freedom, or something like that...not so much the word as the feeling, sort of a lovely, aimless, Saturday morning feeling you don't recall having had lately."

If I may interject, I love hearing things like this, because I often ask people about their tattoos, and they dismiss them, "Oh, well, it doesn't mean anything," they often say, as if that somehow makes the tattoo less interesting. However, tattoos often symbolize times, places, memories, or feelings, and Mark is able to capture that perfectly in his explanation of the tattoo.

I was interested in medieval stuff at the time, especially medieval and Renaissance music, and found this griffin design in a book of Dover copyright-free medieval motifs. A very good artist at Dare Devil Tattoo drew it freehand for practice, referencing the book, then started on my arm and tattoo'd' it straight off. It hasn't faded much, as you can see. I remember I asked for red and yellow, outlined in black, and that's exactly what she gave me.

Mark Nickels lives in New York City. His book Cicada was published by Rattapallax Press in 2000. He has won the Milton Dorfman Prize (1996), the Ann Stafford Prize from USC (2002) and been a finalist and semi-finalist at Lyric Recovery Festival (Carnegie Hall). He is a 2006 New York State Arts Foundation Fellow in fiction, and two poems from his 2o00 collection were recently selected for inclusion in the on-line archive of the Poetry Foundation (aka Poetry).

Thanks to Mark for sharing his tattoo with us here on Tattoosday! Please be sure to check out one of his poems (one that mentions a griffin, too!) here on BillyBlog!

Posted by Tattoosday at 6:05 AM