Cathryn prefaced her tattoo by telling me:

"My tiny tattoo pales in comparison to some...Most of my adult life, I've wanted one, but always held back because I either 1) didn't know what I wanted or 2) feared I'd change my mind as soon as it was done (I change my mind as often as a hummingbird's heart beats) or 3) was working for a relatively conservative company."

This last concern is one that everyone should consider when getting a tattoo. Not that Tattoosday is an Ink Advice blog, but companies can legally discriminate (and often do) against tattooed individuals, which is something many people do not think about when getting inked. At the time that Cathryn got her tattoo, she "was working for a credit union with a strict 'no visible tattoos policy' and ... was part of the management team that actually wrote that policy". She does point out that she was out-voted by the anti-tattoo contingency.

"This was the compromise -- small, discreet, but powerful -- and not so discreet that I had to become a pretzel or strip completely naked to see it for myself or show it to others.... 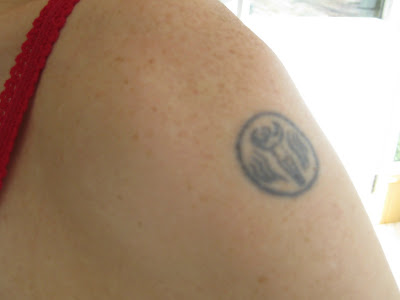 The symbol I finally chose is one that I wore around my neck as a talisman for many years: the Nile River Goddess, Nathor, who represents strength, triumph, success. I was at one of those turning points in my life -- feeling low and falling lower, needing her and those ideals to be more firmly etched in and on me. 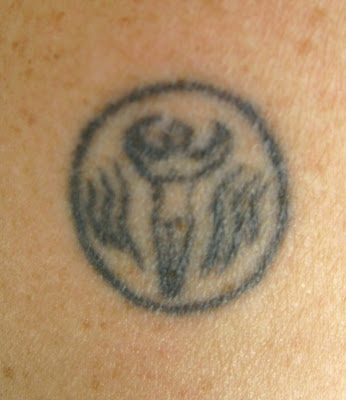 She turned my life around that day. I've thought about another since and probably will some day, but see 1, 2 and 3 above and you'll know why I'm still waiting!

The poem that Cathryn sent us, seen here on BillyBlog, "came out on the drive home, scribbled on an old napkin".

Thanks to Cathryn for participating in the Tattooed Poets Project!

Cathryn Cofell is the author of five books, most recently Kamikaze Commotion (Parallel Press). She's received 40+ awards for her poetry and essays which also appear in scads of journals and anthologies. She is a zealous advocate for the arts, having served as founding Chair of the Wisconsin Poet Laureate Commission, on the board of the Wisconsin Fellowship of Poets, and currently as Chair of the Verse Wisconsin Advisory Board and a pro-arts voice wherever she'll be heard.
Posted by Tattoosday at 5:35 AM

It's always great to see a goddess tattoo!