Lea sent along several photos of her work, so let's not waste any time checking out her ink. 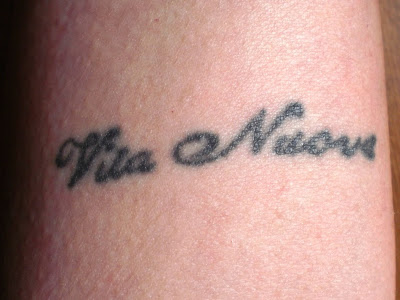 "Vita Nuova" was the first tattoo celebrating my divorce, my new life. I was deep into Dante, especially the Purgatorio. I had read three translations and was taking a break when someone gave me La Vita Nuova. The thirty poems fascinated me --- they were so personal, an autobiographical narrative in which Dante wove a web of romance and emotion. Such spiritual inspiration was integral at that time! I was interspersing Dante with Emily Dickinson then and I had the same artist at Mom’s Tattoo Studio in Keene, NH do the tattoo on my right shoulder. You know … “Tell all the truth but tell it slant.” I still felt I was contained lightning from the wreckage of my marriage; wanting to tell the truth in my poetry but having a hard time with it. So this was the design I came up with. I’m actually thinking of having the lightning go outside the circle … I am NOT contained anymore! 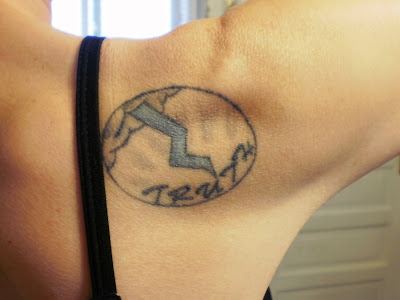 Tell all the Truth but tell it slant 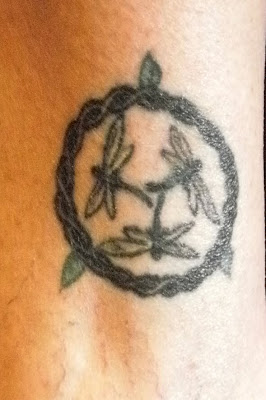 ...Done in 2004, [this tattoo] was my version of a design from the Book of Kells, an Irish manuscript containing the Four Gospels. My daughter and I were visiting England and were staying at a B&B in Glastonbury. One day, she decided to climb the green hill of the Tor, crowned with the tower dominating the town and the surrounding landscape. I had to sit it out because my foot was giving me trouble. My foot at that time had undergone four surgeries. I picked up a book showing illustrations from the Book of Kells. I dreamt of this dragonfly tattoo on the plane ride back and took my vision to a tattoo artist at Blackbear Tattoo & Jewelery Company in Brattleboro, VT. I was very pleased with the result: three dragonflies facing different directions signifying healing movement for my foot. Although I had a fifth surgery, I started walking again and even running. I promised Sarah that we’d return and climb the Tor together.

And my personal favorite... 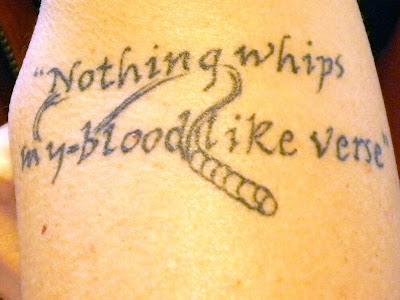 The fourth tattoo on my left bicep, done by Pygmalion’s Tattoo in Greenfield, MA, is a quote by William Carlos Williams, “Nothing whips my blood like verse.” I had it done right before the AWP conference in Chicago and bore it proudly. The whip that winds throughout the quote was a flourish done by the artist. I ran into a friend who was a W.C. Williams scholar and he said he had never heard it attributed it to Williams! I swear it was in a book or on the web and if anyone can tell me different, please do.

Good news, Lea, I found reference to it in The Selected Letters of William Carlos Williams (1957).

Please be sure to check out one of Lea's poems over on BillyBlog here.

Lea Banks lives in . She is the author of the chapbook All of Me, (Booksmyth Press, 2008). She was a finalist for The Pavel Srut Fellowship in and had two poems nominated for the 2009 Pushcart Prize. Banks is the founder of the nationally-known Collected Poets Series in and editor of Oscillation: Poetry in Motion. She was the former poetry editor of The Equinox and editorial assistant for the Marlboro Review. She attended ’s MFA program, facilitated stroke survivors’ writing workshops, and is a full-time poet, community organizer, freelance editor and writer. Banks has published in several journals including Poetry Northwest, Slipstream, Diner, and American Poetry Journal. See more here: www.leabanks.com.

Thanks again to Lea for sharing her tattoos with us here on Tattoosday!

Posted by Tattoosday at 5:24 AM