We are launching this second volume of the Tattooed Poets Project with Theresa Senato Edwards.

Theresa seemed like the ideal candidate to kick off the month, as she is the devoted editor of Holly Rose Review, a poetry and tattoo literary arts journal.

Theresa has four tattoos, and picked two to share with us here on Tattoosday.

Her first tattoo was this Celtic symbol on the left part of her upper back: 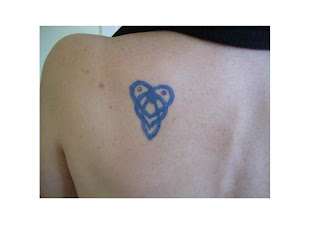 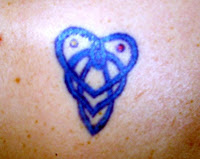 Theresa tells us that this is the:

"Celtic symbol for motherhood, two dots representing my two sons. The goldish dot for Richard, his birthday in November (November birthstone); the red dot for Troy, his birthday in July (July birthstone). I had asked my younger son, Troy, if he thought it would be cool to have his artwork on my skin forever. He did, so he drew it for me, looking at a pic I got off the internet. Tattoo by Mike Calamita, Lasting Impression Tattooing in Hopewell Junction, NY."

My favorite of Theresa's four tattoos was the third one she received, this holly rose: 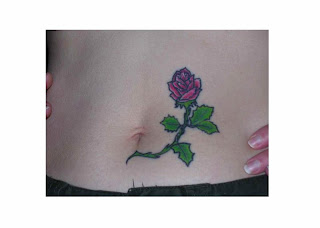 Theresa explains that this holly rose is

"a holly branch wrapped around a bloomed red/purplish rose with thorned stem.... [and] symbolizes my parents: my dad's birthday was in December; the holly is one of the plants that represents December. My mom's birthday was in June; the rose represents June. They have both been dead for more than 15 years. I had this done in their memory. That's also where the title of Holly Rose Review comes from, although I didn't know that at the time I got the tattoo. Also done by Mike Calamita." 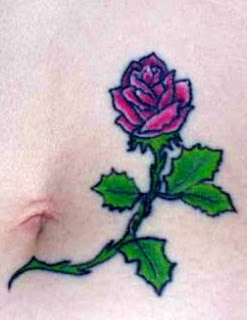 Check out Theresa's poem "Holly Rose," about this tattoo, over at BillyBlog. You can read more of Theresa's work over on her blog here.

Thanks again to Theresa for helping kick off our second annual Tattooed Poets Project!
Posted by Tattoosday at 12:05 AM