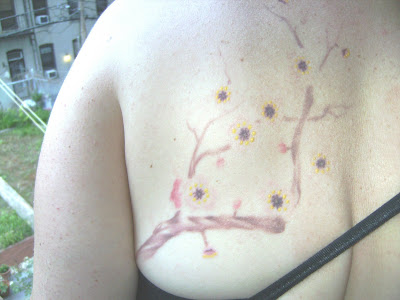 It seemed quite appropriate that, as I had some guests over to celebrate my birthday, Amanda, a friend of my wife's, was sharing with me a tattoo she had inked as a 30th birthday gift from her husband.

I'm fairly certain that this is the first one of these tattoos appearing here and, when I say, "one of these," I am referring to the type of tattoo that looks like it has been painted on in a watercolor style.

This was inked by Adam at Electric Rose Tattoo in Olympia, Washington. According to Amanda, Adam has tattoo training in Japan, and this watercolor-style piece certainly evokes cherry blossoms. 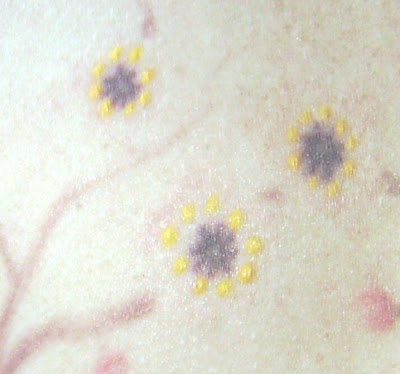 Amanda elaborated on the origins of this tattoo. In 2001, she was dating James, who would eventually be her husband. She had become pregnant and suffered a miscarriage in September, and this experience, after they had been dating for only seven months, was very traumatic for them.

She has other tattoos (this one was number six), and she wanted something to mark the moment, to memorialize the difficulty of the situation that was such a touchstone for emotion at the time. As the years passed and she thought of the occasion for this tattoo, searching for what she thought was the appropriate art to base it on, she envisioned a tree from which to draw her strength.

Then, in 2004, she found the image upon which the tattoo was based, on a thermos, of all places. Amanda knew instantly that this was the art she wanted on her back. She finds that it symbolizes the rebirth of her self and represents what could have been, had she not miscarried. She recalls that this was more painful than any of the other tattoos she has (three on her ankle, two on her hip) and that the emotion behind the piece helped her transcend the pain as part of the healing process.

It's a beautiful tattoo with deep meaning, and I thank Amanda for sharing it here on Tattoosday!

Posted by Tattoosday at 9:39 AM