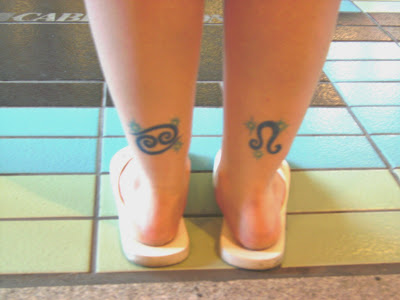 I was on my way home when I spotted Lisa, who was with a friend, in the hours before Bon Jovi's second night at Madison Square Garden.

It was only when she stopped to explain, that I was able to grasp the tattoos meanings (two for Tattosday, no less!).

Lisa had a wrap-around musical staff on her right arm, a nod to her being a musician, but the pieces that circle limbs are hard to do justice for on the web.

I asked instead, about the two I had spotted, the ink that was on the back of her legs, down by the Achilles' heels.

Lisa stated she was "on the cusp," so she related to both astrological signs in proximity to her brithday, July 23.

Alas, Lisa was in a hurry, and my still-working-the-kinks-out camera was stuck in sunrise mode. The end result is a little blury - Lisa, don't forget to email me better pictures!

These tattoos were inked by Christian DiMenna at Lovecraft Tattoo in New Haven, Connecticut.

Thanks to Lisa for taking the time to chat about her tattoos!
Posted by Tattoosday at 5:58 AM