Ashley Displays the Mark of Friendship 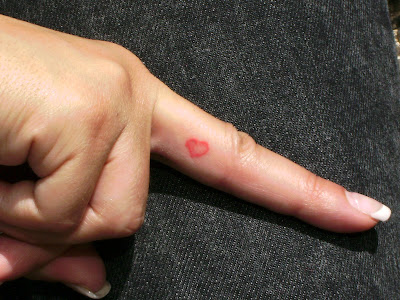 I met Ashley when I approached Becky (her post here) about her work. Unlike Becky, who is inked 27 times, Ashley has just four pieces, none of which are immediately visible.

However, after talking with her friend Becky, I queried Ashley about any tattoos she might have, she offered up the small piece above.

Ashley's friend Turner Walker is an aspiring tattooist who is learning the art form. Turner, with whom she had gone to school, asked if he could practice on her and, when she assented, he placed two small red hearts on either side of the middle finger on her right hand.

She laughs about it, thinking it's cool that wherever she goes, she'll have a piece of him inked on her body.

Personally, I like the fact that she has a couple of hearts inked on a finger that is often misused by humans to make an unpleasant gesture.

Thanks to Ashley for sharing her small heart with us. True friends let their friends practice tattooing them!
Posted by Tattoosday at 7:13 AM