Sam's Lotus in Memory of a Friend Gone Too Soon 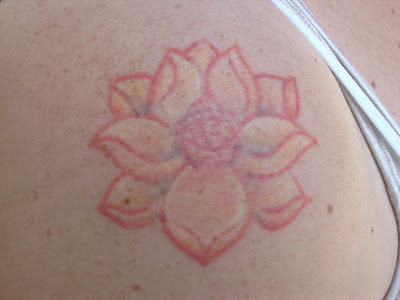 I ran into Sam outside of Rite-Aid in my neighborhood, and she let me take a picture of the tattoo above.

Sam has a handful of tattoos, all meaningful, but we selected this one, on her right shoulder.

The lotus has an interesting look to it. She had wanted it to have a distinct pastel appearance and is happy with the way it came out. She later had a different artist ink a corresponding lotus on her left shoulder, but the ethereal effect did not quite have the same result in blue.

Sam explained that she hails from a small town where, unfortunately, there's at least one suicide a year among the younger population. As troubling as this was, it never really hit her hard until one of her friends took his life and became one of the statistics. Complicating matters was that a handful of others followed suit, making the experience even more trying.

She helped her own healing process by getting this tattoo. More important than the lotus' meaning as a life-affirming flower, Sam, like many people, find that being tattooed is a transformational experience, relieving her stress and pain.

She hopes to build off of this lotus and eventually ink a larger piece, in the quarter to half-sleeve range. Any interested artists should e-mail me and I can put Sam in touch with you.

The lotus was inked by Monique at Lotus Tattoo in Patchogue. Monique, she understands, has left that shop and relocated somewhere in Brooklyn. The shop, as well, seems to have shuttered its doors as well.

Thanks to Sam for sharing her lotus with us here at Tattoosday.
Posted by Tattoosday at 5:57 AM