Not Seeing, But Knowing 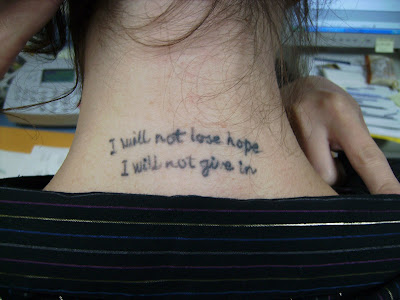 Ashley has this tattoo on the back of her neck. The lines "I will not lose hope/I will not give in" are based on lyrics from a song called "The Crimson" by a band called Atreyu.

The lyrics were words commonly uttered by Ashley's best friend and cousin, who died a couple of years ago. He committed suicide after learning he had a serious illness. She and another cousin chose to honor his memory by having the lyrics tattooed on them as a reminder not only of someone near and dear to them, but because the message transcends death and affirms life. Even though her friend succumbed to suicide, the memory of him instills strength in her even though he is no longer part of the physical world.

As Ashley indicates, she chose the back of her neck because she "can't see it, but I know it's there," just as she can't see her departed friend, but knows that he is still with her.

This tattoo was inked at Body Designs in Bay Shore, New York.

As an extra bonus, here's the video for the song "The Crimson" by Atreyu:

Thanks to Ashley for sharing her tattoo and the personal story behind it, here on Tattoosday!
Posted by Tattoosday at 5:49 AM