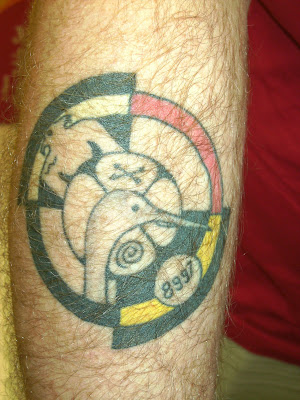 I was waiting for a prescription at Rite-Aid, on Thursday, July 17, which had already been a record Tattoosday. I saw a familiar-looking guy with the tattoo above on his forearm.

I asked him about it and he recognized me as the father of my two daughters who used to go to an after-school program where he had worked for a spell.

He was more than happy to explain this interesting tattoo to me. It is a Native American medicine wheel that he designed and brought in to Kings County Tattoo Company where the artist, Paulie, transformed it into a tattoo.

Paulie has been mentioned previously on Tattoosday here.

Kings County Tattoo has had work featured on this site here.

Sal explained that the outer part of the wheel is comprised of four colors: red, brown, yellow and white, each representing one of the races of humankind.

The crane features prominently in the piece because it is the symbol for the Baswenaazhi clan in the Chippewa tribe from which his father (and thus, he) is descended.

The thunderbird represents strength. The spiral equals life. And the arrows are emblems of Native American culture.

The entire piece is an elaborate tribute to Sal's family. I thank him for sharing his medicine wheel with us here on Tattoosday!
Posted by Tattoosday at 6:47 AM