Damien's Pistol Star Nebula Tattoo is Out of this World 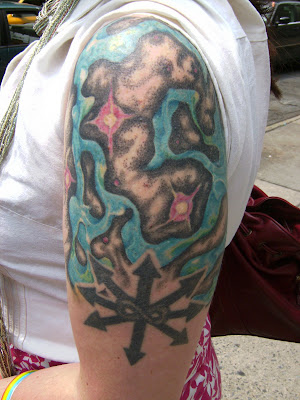 I ran into Damien near Fashion Institute of Technology earlier in the week, and her bright, colorful tattoo just jumped right off of her in the sunlight.

She explained to me that it is based on a photograph of the Pistol Star Nebula, as seen from the Hubble telescope: 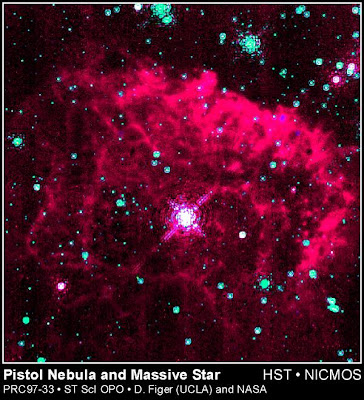 She stumbled upon the photo on the NASA website and loved the shape of it. Anyone who has seen the photos from the Hubble, which are in the public domain, should agree that they are spectacular visions from beyond our world.

The book designer and novelist Chip Kidd coincidentally posted this past week, on his website about a new book for which he had designed the cover (here), the images on which were from the Hubble eye on the universe.

This piece was inked by Chris Kowalski, a tattooist in Toronto at Abstract Arts Tattoo and Body Piercing, and is one of seven tattoos that Damien has.

I noticed after the fact, while glancing at her website, that the tattoo is inked above a pre-existing piece, as evidenced in this photo from her site: 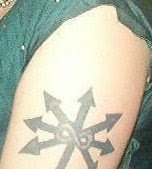 Aside from the symbol for infinity and the arrows pointing out from all directions, I cannot speculate on the meaning of this earlier tattoo, but am hoping she will offer up an explanation at a later date.

Thanks to Damien for sharing her galactic ink with us here on Tattoosday!
Posted by Tattoosday at 7:59 AM

Nicely done, Bill! The arrows pointing outward are a chaos wheel, based on the theory that the physics of the known universe are essentially chaotic, and that we should appreciate that instead of trying to force an order onto it!