Dropping a Couple of F Bombs

I ran into Shawn and Chris from Albany outside of Penn Station on Thursday, July 17. Both were heavily inked.

Of their many tattoos, one had some additional meaning, and it was one that they both had on their lower shins. In fact, they told me, there is a group of about twenty of their friends with the same tattoo.

A while back, one of their good friends, a personable guy nicknamed "F-Bomb," passed away suddenly due to some complications from a diagnosed, but not necessarily life-threatening health condition.

It was a great shock, and not only did his large circle of friends band together to help F-Bomb's mother pay for the funeral, but they all got the same tattoo to memorialize him for the rest of their lives. 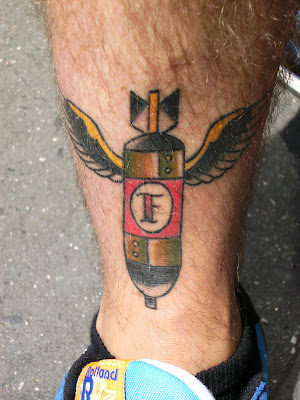 That is a still shot on Chris and also, due to my mishandling of the camera, here are two seconds of video of the same piece on Shawn:

The tattoos are credited to artist Christian at the Dead Presidents Lounge in Albany, New York.

Thanks to Shawn and Chris for sharing a little of F-Bomb here on Tattoosday.
Posted by Tattoosday at 6:00 AM