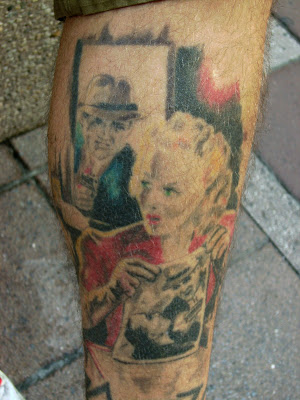 I met Bryan last week outside of Penn Station. He has "7 or 8" tattoos, and he offered up this piece from his left leg.

It's a recreation of a pulp book cover that depicts a woman holding a photograph of a crime in progress, just as the man in the photo who is the perpetrator, is entering the room, gun drawn.

The woman appears to have just developed the picture and her face is wracked with frightened recognition of the fate that is about to befall her.

Bryan recalls coming across this image when he was a teenager. I have a distinct feeling that I've seen this image before as well, but I was unable to find the source material. If anyone knows the title of the book upon which this tattoo is based, please let me know.

Bryan also likes the core element of photography within the tattoo, as he has always been interested in that art form, and he still considers photography a hobby.

This piece was inked by Jason Goldberg at Olde City Tattoo in Philadelphia.

Thanks to Bryan for sharing this amazing leg piece with us here at Tattoosday!
Posted by Tattoosday at 5:53 AM