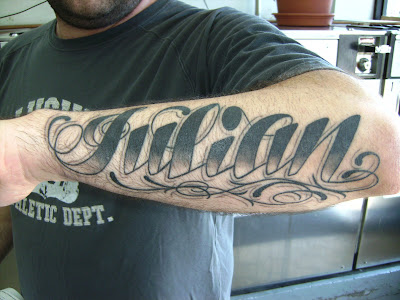 I ran into Alex at the laundromat and complimented him on the name inked on his left forearm.

The piece is a tribute to his son Julian. As a fellow father with tattoos honoring one's kids (see one of them here), I certainly appreciated the sentiment.

This piece was done by an artist named Salem, who is part of the DFM crew in San Francisco.

Another interesting fact about this piece is that it is on Alex's left forearm. Both he and his son are left-handed, and Alex's four other tattoos are on the left side of his body. He strongly believes in inking only on that side of his person and does not intend to ever ink the right side of his body.

Thanks to Alex for sharing his ink with us here at Tattoosday!
Posted by Tattoosday at 5:51 AM