Today's tattoos come from Adam Deutsch. We started with this photo:

Photo taken by Lillian Bertram.
A cool photo, and Adam explained the piece:

It's based on a Gustave Doré etching from his interpretations of Milton's Paradise Lost, the lines "He the Almighty Power/ Hurled headlong flaming from the ethereal sky" (I. 44-45) when Lucifer is waging war, before the fall to Hell. 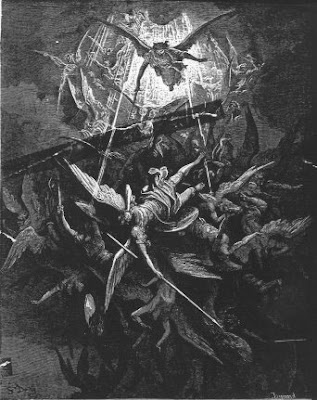 White ink is incorporated in the rain, and on the halo over his head, as he's still an Angel. We've all got something we turn to over and over again; Paradise Lost is always there.

The tattoo was done at Lark Tattoo in Westbury, New York. The artist was Sunday Dawne-Marie.

Despite the awesome nature of this tattoo, I pressed Adam for something more, as it's a bit hard to make out the images of the tattoo in the photo, and I really want to showcase the work.

Our discussion progressed and Adam ended up sending me photos of his leg piece, as well.

Adam points out that this piece, on his right leg, is based on the depiction of Pandemonium, also from Paradise Lost. This is the mock-cathedral in Hell where the fallen angels meet to decide what is next on their agenda:

Mean while the winged Haralds by command
Of Sovran power, with awful Ceremony
And Trumpets sound throughout the Host proclaim
A solemn Councel forthwith to be held
At PandÆmonium, the high Capital
Of Satan and his Peers (lines 752-757)

The detail in the piece is phenomenal: 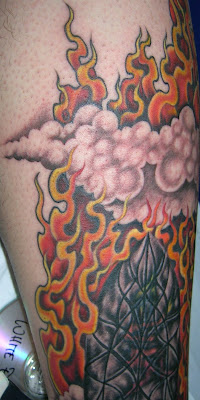 Adam notes that the two tattoos, both on the right side of his body, "talk to each other....it's a conversation between an angel & devil". He adds that, "in that context, my arm becomes Elijah, fallen, but re-risen."

The arm took about two hours to complete, but the leg took approximately ten hours, in two sittings of four and six hours, respectively, about a month and a half apart. The two pieces seen here are among four "literary" tattoos Adam has. He also has a whole sleeve based on Emerson.

Head over to BillyBlog to check out one of Adam's poems here.

Thanks to Adam for sharing his amazing work with us here on Tattoosday, with a special thanks to Jill Alexander Essbaum (whose literary feet kicked off the Tattooed Poets Project here) for sending Adam our way!
Posted by Tattoosday at 12:06 AM