I first heard that Doug Anderson had an "amazing" tattoo via the poet Marilyn Nelson.

When I saw photos of it, I knew she wasn't exaggerating. Doug went in to Green Man Tattoo in West Hartford, Connecticut, and met the co-owner, Jon Elliot. He did what is considered ideal for a lot of tattoo artists: he gave him a kernel of an idea and "told him to do what he wanted as long as it was a phoenix". Doug notes, "I like to let artists do that because they always do their best work that way." Agreed, and the proof is in the end result.

The tattoo was completed in 2 two-and-a-half-hour sittings. Here's the basic piece before the color was added: 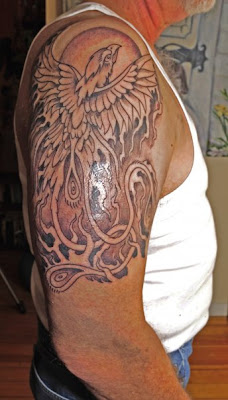 And then the final result: 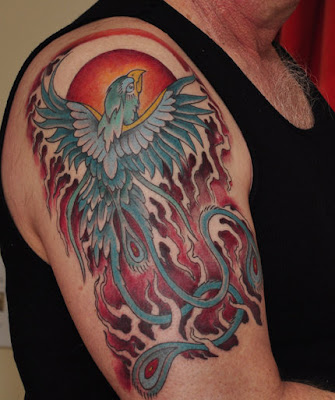 The phoenix is a popular image in tattooing, yet one that you don't see too often, as they tend to be large, elaborate pieces. Doug elaborated a little as to why he wanted a phoenix:

"The phoenix, of course, is a symbol of rebirth from the ashes, a story that matters to me because it describes my life. I began writing late in life and very nearly did not survive my early life."

Be sure to head on over to BillyBlog and read one of Doug's poems.

Thanks to Doug for contributing to Tattoosday's celebration of National Poetry Month!
Posted by Tattoosday at 12:01 AM