The Tattooed Poets Project: Guy LeCharles Gonzalez Presents A Bat from Jersey and a Honeymoon Memento

Today's tattoos are presented by the poet Guy LeCharles Gonzalez.

The first one is a bat: 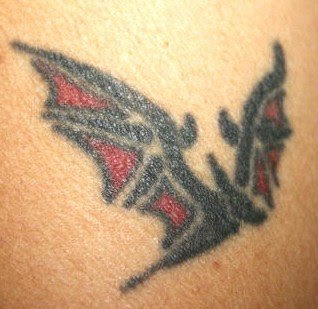 "I got the first tattoo, a stylized bat, back in 1995 somewhere in New Jersey; Toms River, maybe? I'd resisted the urge to get one while I was on active duty in the Army, not wanting something stereotypical that I'd hate or regret a few years later, but a friend of mine had finally psyched herself up, and convinced me and another friend to head down to the Jersey Shore and do the deed as a group. Before we got to the Shore, which seemed much further away than we thought it was, we passed a small tattoo parlor on the side of the road and decided to go there instead. Batman has always been my favorite superhero, appealing on a number of levels, but I figured the logo would be too cheesy for a tattoo, and picked out a bat from the artist's sketchbook, tweaked it a little bit, and voila! I still love it to this day."

The second tattoo Guy sent was this:

"I got the second tattoo, a pseudo-tribal band with my wife's name in the middle, on the second-to-last day of our honeymoon in Cancun in July 1998. There was a tattoo parlor in one of the flea market/shopping districts up near the elbow of the strip that seemed pretty clean -- despite the handful of teenagers getting tattoos they would certainly regret a few years later -- and against our better judgment, we both decided to get our second tattoos, each incorporating the other's name. We'll celebrate our 11th anniversary this summer, and before then we both intend to have those tattoos tweaked; I'd like mine to be bigger and have more of a Mayan flavor to
it as I've always felt a connection to that culture, even before our trips to the Yucatan."

Thanks to Guy for sharing these tattoos with us here on Tattoosday!

Please head over to BillyBlog and check out one of his poems here.
Posted by Tattoosday at 12:13 AM