As the end of National Poetry Month approaches, I find myself in an enviable position: too many poets' tattoos, too few days. So, I've decided to "double up" and make today a "Two for Tattoosday". I have also realized that this Tattooed Poets Series will have to continue, in one form or another, above and beyond National Poetry Month. Stay tuned for more details.

In the mean time, Meredith S., a poet from Brooklyn, sent in the following photo: 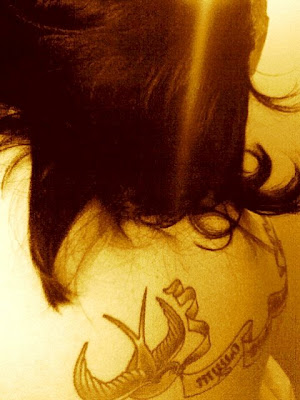 I know, I know, you can't see the whole piece in that shot, but it's pretty cool, and you can get some detail on the sparrow. Here's a more traditional shot: 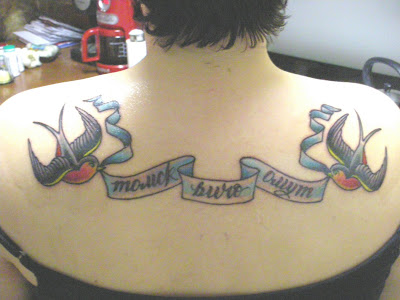 
"I happen to love tattoos as a intimately personal expression of ourselves...
[This] ... is an interpretation of a Russian prison tattoo that families and lovers got when they were separated by prisons and Stalin's concentration camps. The tattoo is a traditional pair of swallows holding a three-piece banner with the Russian acronyms: tomsk (a city in Russia); vino (wine); omyt (whirlpool). The acronyms stand for: you alone have my heart; come back and stay forever; it is hard to leave me.

Alex McWatt at Three Kings Tattoo did an amazing job at putting all the elements together. I decided to get this tattoo after losing most of my family members, but mainly after my mother, who is a drug addict, disappeared from my life 5 years ago."

Meredith also submitted a poem about her mother that she composed after seeing a prison mugshot of her a couple of years ago. That poem is posted here on BillyBlog.

Alex McWatt has had work appearing before on Tattoosday, here.
Posted by Tattoosday at 11:57 AM