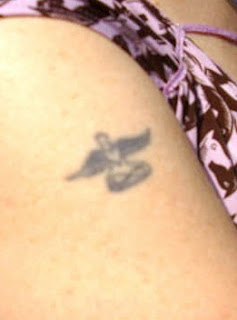 I contacted Malaika on Facebook when I saw her profile photo, and that she had a visible tattoo. She was kind enough to not only accept my friend request, but also to submit the photo above, along with one of her poems, over on BillyBlog.

Malaika filled me in on this piece:

I may have gotten this tattoo, my second one, at Shaw’s [Tattoo Studio] where I got my first tattoo. I was probably on Westheimer Blvd., was definitely in Houston sometime in the mid-80’s and was most likely in the good company of a guy named Nicki Sicki. The image is of a person meditating with wings and a heart, and is borrowed from Ram Dass’ book Be Here Now. The sideways 8 represents sitting in lotus position and is also the symbol of infinity. Though the heart has lost its red color, and the tattoo is an admittedly unambitious one, the image still resonates with me.

I love Malaika's modesty about the tattoo. Admittedly, it is not "spectacular," but tattoos do not have to be huge, multi-colored affairs in order to have significance for those that have them.

Thanks to Malaika for sharing her tattoo with us here on Tattoosday!

Please visit BillyBlog to read one of her poems here.
Posted by Tattoosday at 12:06 AM